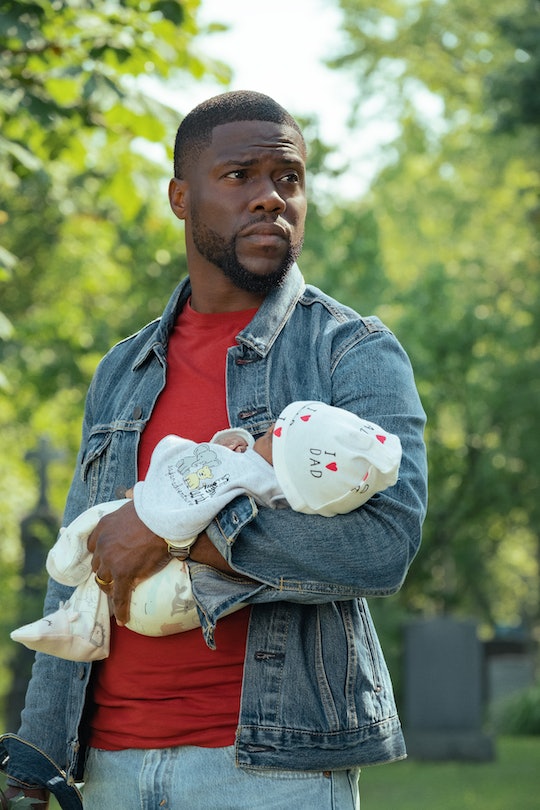 Kevin Hart’s role in Netflix’s new drama Fatherhood was not his typical gig. Known for his high-strung, self-deprecating comedy, the father of four portrays Matt, a man suddenly and unexpectedly widowed a day after his daughter’s birth. Based on a true story, the film explores Matt’s struggles with single parenthood and grief, at turns heart-wrenching and funny, following father and daughter in the days, weeks, and years after their loss.

Hart’s Character Is Based On Matthew Logelin, A Real-Life Dad & Widower

After a years-long, long-distance courtship that began in high school, Matthew Logelin married Liz Goodman in 2005. The couple settled in California where Liz was a Disney executive and he worked at Yahoo!. They were able to travel extensively, especially since Logelin’s work often took him to India, and Logelin documented their travels and life together on his (now defunct) blog, MattLogelin.com. In 2007, the couple announced they were expecting their first child and the blog turned from documenting far-flung travels to keeping distant family members up to date on Liz’s pregnancy.

On March 24, 2008, Madeline “Maddy” Elizabeth was born via emergency C-section. Though Maddy was seven weeks early, both she and Liz appeared to be doing well. But tragedy struck when, 27 hours later, on her way to hold her daughter for the first time, Liz collapsed and died of a pulmonary embolism that no one knew she had.

Logelin’s Blog Became An Outlet For His Grief

Logelin’s blog, which he renamed Matt, Liz and Madeline: Life and Death, All in a 27-Hour Period, gained a lot of attention through the early stages of his parenting — and grieving — journey. At the height of the site’s popularity, he would reportedly receive upwards of 40,000 hits a day. Readers became a kind of lifeline for him and would offer him advice, consolation, and even send gifts — formula for Maddy, beer for him. In 2009, the same year he gained additional notoriety after appearing on Oprah to share his story, he started The Liz Logelin Foundation, which provides financial support widowed families.

In 2011, he published his memoir, Two Kisses For Maddy: A Memoir of Loss and Love, which documents his life with Liz and the year following her passing, including the experience of building an online community through his blog. This book provides the backbone of Fatherhood, though there are some deviations.

Fatherhood Goes Beyond The Scope Of Two Kisses For Maddy

Whereas Two Kisses for Maddy largely focuses on Logelin’s parenting experiences in the year following Liz’s death, Fatherhood sees the story into Maddy’s school years. Hart’s character finds himself struggling with his daughter’s school, his late wife’s family, his career ambitions, his lingering grief, and the prospect of once again finding love.

There’s One Big Change Logelin Wants To Clear Up

One notable departure from Logelin’s life is the character of Marion. Played by the always fabulous Alfre Woodard, Marion is Matt’s well-meaning-but-overstepping mother-in-law, which Logelin says isn’t true, even down to her name. “She's the exact opposite of my actual mother-in-law,” he told Hello! Magazine. “Candee is not overbearing. So that's one big deviation from reality.”

In an interview with Anna Menta of The Decider, Logelin explained that the character was changed because “it’s great for the movie, but it’s not something that happened in real life.”

“The film plays up some of the tensions that you would expect to have between a mother-in-law and a son-in-law that never really existed in our relationship,” he told The Decider. “Maddy’s grandma is the sweetest, most wonderful person, and Alfre Woodard did an amazing job playing her.”

Logelin Has Praised The Emotional Accuracy Of The Film

Despite some changes, Logelin has praised the emotional accuracy of the movie, including some of the most difficult material. “That scene in the hospital where she collapses is where I really start to kind of lose it, because it's so incredibly accurate to my experience, with that kind of speed,” he told Hello! Magazine. “That was exactly how that happened in real life. It was just awful.”

But what he’s most pleased with is that the movie highlights “universal themes” that every family can relate to. “What’s important about this movie is that there are universal themes,” Logelin told The Decider. “There’s love and happiness, and sadness and death, and that’s what remains. You can change everything about this movie as long as you keep those sentiments.”