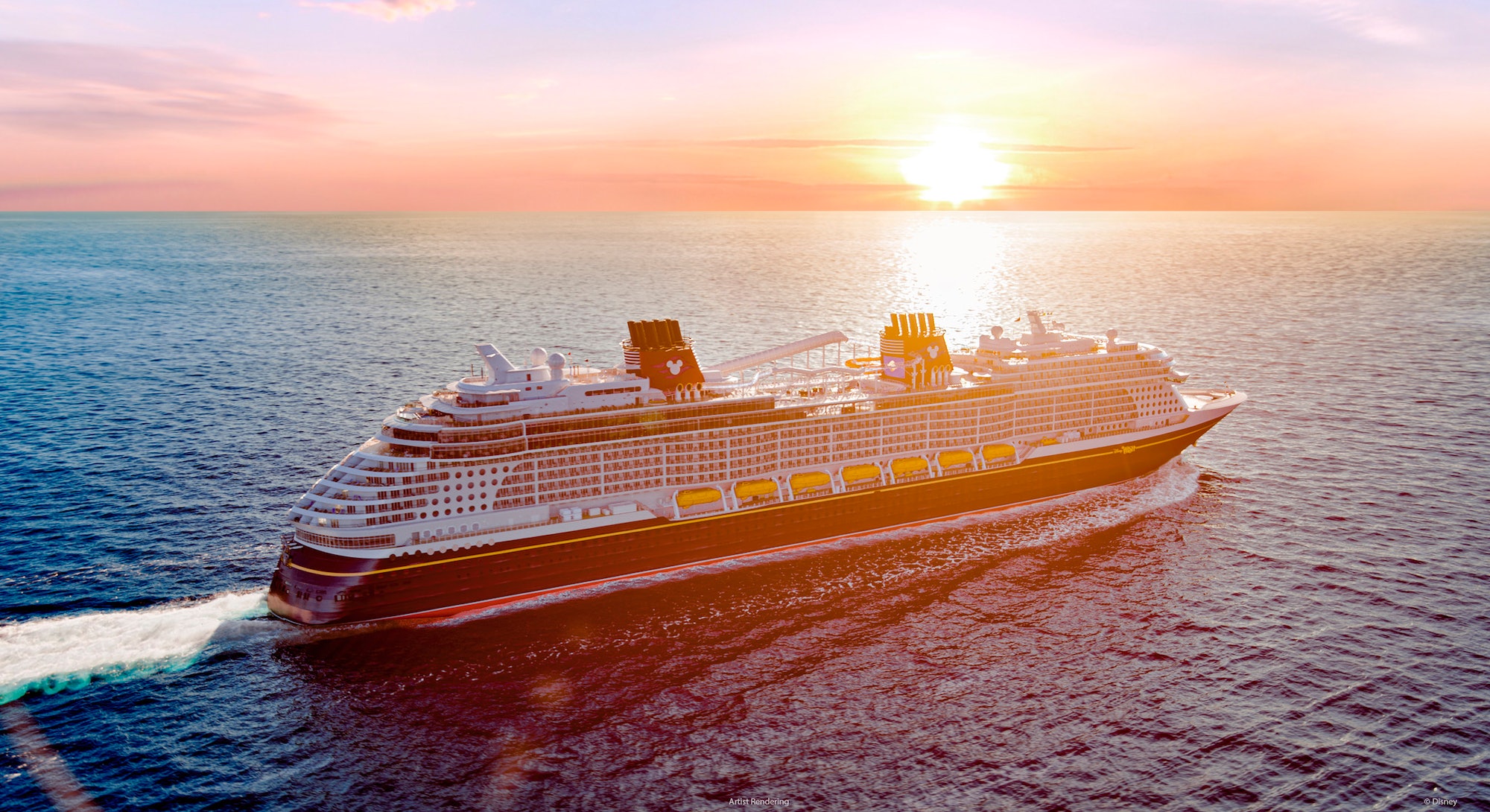 The new ship is the best of both worlds: Disney theme parks and cruises in one giant, floating castle.

Walt Disney Imagineering (WDI), Disney’s internal, secretive design firm of creatives, engineers and storytellers, doesn’t just work on theme park rides. “Imagineers” also design Disney Cruise Line (DCL) ships and the Disney Wish is the most magical yet. The fifth addition to the mouse fleet sets sail June 2022 and is packed with unique themed spaces for kids, teens, tweens, toddlers and even infants, from a hidden slide entrance that mimics going down the rabbit hole to Belle's library a la Beauty and the Beast to designing and riding in your own roller coaster at sea.

Here’s a first look at details on board plus new family entertainment, like immersive Frozen and MARVEL dinner shows and a new interactive game for families that unlocks surprise elements and Disney Easter eggs on board.

“Where magic meets the sea” is the Imagineering creed for Disney Cruise Line. And it’s not just good decor. WDI brings innovation to the cruise industry just like the theme park business. When DCL came along, it shook up the cruise market with one little addition to staterooms that no other ocean liner thought families with children might need: a bathtub. Cabin pricing for DCL is definitely higher than other big brands, but this company gets families. And there’s hidden value in the design. DCL ships have more connecting rooms than any other line. They were the first to do rotational dining and the first and only to do fireworks at sea (with ashes that turn into edible fish food). The mouse house thinks of everything when Mickey takes the wheel and the Disney Wish is an evolution of what makes DCL so special. It’s also a temp check for addressing pain points from previous ships. This time around, they took out the third elevator bank that all ships have in the center atrium to alleviate bottlenecks on embarkation days. And it’s not even an atrium anymore. On the Disney Wish, it’s called a grand hall. Because this is a literal castle at sea. And kids rule the kingdom.

Each Disney ship features an Oceaneer's Club for kids 3-12 and these highly-themed spaces always wow teens and adults during open house tours. The secure, babysitting space is the epitome of childlike wonder and imagination. Even washing your hands is so freaking cool. The club has mini washing machine barrel-like holes that you stick your hands and arms into and it automatically puts your extremities on wash, rinse and dry. And once your kiddo is sufficiently sanitized, it’s playtime.

The Oceaneer’s Club on the Disney Wish will feature three main sections: Walt Disney Imagineering Labs, Fairytale Hall and MARVEL Super Hero Academy. At WDI Labs, kids will experience what it’s like to be an Imagineer from concept to construction. It’s basically “RollerCoaster Tycoon” IRL with a ride simulator for iconic Disney attractions such as Matterhorn, Space Mountain and Big Thunder Mountain Railroad. Fairytale Hall is the perfect spot for indoor kids. The space was designed in collaboration with Walt Disney Animation Studios and features Rapunzel’s tower for arts and crafts and Belle’s library with walls of books and e-readers, a digital fireplace and an enchanted painting. And over at the Avengers-style lab, kids can meet Black Panther, Ant-Man, Wasp and Spiderman as well as design their own superhero suit. But the coolest feature here isn’t even inside the club. It’s the entrance. Because in addition to an elevator and stairs, kids can slide into the club via a secret Alice in the Wonderland-themed rabbit hole. Adults won’t be allowed to use the slide, but for the first time, parents can see into the kids’ space from the grand hall. This is a game changer for families who want to check on little ones without actually going into the club.

Not to be outdone, the tween (ages 11-14) club Edge is inspired by a trendy New York City loft. And the exclusive teen (14-17) club Vibe will feature a chic Parisian-style hangout with TikTok-worthy pop art. As for little ones, ages six months to three years old, the “it’s a small world” nursery is perhaps one of the most adorable and aesthetic rooms on the ship.

An Attraction at Sea

Despite being a theme park company, Disney cruise ships just had water slides. Really awesome water slides, but not a true attraction. That ends with the Disney Wish as this ship will feature Disney’s first-ever attraction at sea: The AquaMouse. This 760-foot water coaster got the full WDI treatment, from a backstory to a themed queue to interactive tech. Inspired by “The Wonderful World of Mickey Mouse” animated shorts, the ride drops you into the cartoon world where Mickey and Minnie have just started a travel company called Port Misadventures. And as the design of the raft vehicles suggests: Things don’t go as planned.

This is definitely a big kid ride as the height requirement is 42 inches, which is a couple of inches taller than most of Walt Disney World’s thrill rides. Kids, teens and even adults will want to ride this over and over again as there are two different ride stories to experience on the AquaMouse. “Scuba Scramble” and “Swiss Meltdown” both begin in the ride’s giant conveyor belt tube with nine oversized portholes into the cartoon world. As it’s a water ride, there are 60 different nozzles with different surprise effects, from light mists to sprays and splashes, all timed to scenes in the story. By the time you’re at the top, you’ll be soaked. Then gravity takes over. And don’t think you can outsmart and dodge the jets. The water effects are tied to each misadventure so the experience will be different for each ride.

Disney ships have always had a slightly different blueprint because there’s no casino. And without that space, there’s a lot of square footage to play with and create more family-friendly areas. The Disney Wish has a completely reimagined pool deck, separated into three zones with 10 pools and splash pads. Instead of one overcrowded main pool, there’s now a mini pool for every personality, from a Toy Story district with larger-than-life rubber bath toys to the first-ever quiet family pool for parents who would love to hang out at the adults-only pool all day but can’t because of little humans who also want to swim.

One of the coolest things to do at night on a Disney cruise is watch movies on the jumbo Funnel Vision screen. You can even swim while you watch! And WDI has come up with the most clutch feature for making nighttime movies more magical. The new pool deck features a tiered amphitheatre of chaise lounge chairs putting you at eye level with the screen just like a stadium-style movie theater on land. This is huge for little ones (and short adults) as everyone will have a totally unobstructed view.

DCL has been tight-lipped about what new Broadway-style shows will debut at sea. But details have been released about the state-of-the-art performance spaces and there’s some seriously-impressive, how-did-they-do-that?! tech. The Walt Disney Theatre in this new ship class looks a lot different than its previous iterations. It’s green, inspired by nature and Fantasia and will feature projection mapping capabilities just like the castle shows at Disney World and Disneyland. Up on the pool deck, stage shows will now have LED panels for futuristic digital sets. But some of the most wow-worthy technology is in the restaurants.

Two dinner shows will put your family right smack dab in the action of Frozen magic and MARVEL quantum physics. In Arendelle, A Frozen Dining Adventure, you’ll enter a Norwegian-themed royal hall with a theatre-in-the-round stage and a Nordic-inspired menu. The show takes place right where Frozen 2 left off, at an engagement party for Queen Anna and Kristoff. But the real star is Elsa as she’ll show off her ice powers in ways you don’t see in the theme parks. Special effects will give the ceiling a literal frozen appearance and augmented reality will change the real-time view out of the restaurant’s windows to display the aurora borealis somehow floating above the ocean. Over at the World of MARVEL during “Avengers: Quantum Encounter,” you’ll help Ant-Man and Wasp in a cinematic, dinnertime battle against Ultron. Each table in the Avengers-themed restaurant features a glowing Pym particle tube that your family will have to interact with to save the day. And as Ant-Man fans know, Pym particles can be tricky. Don’t be surprised if your dessert is accidentally altered in the process!

The Disney Wish offers the most robust roster of Disney characters to interact with, from Star Wars to MARVEL to Pixar to Disney classics, and it all culminates in a brand-new interactive game for families to play together. Dubbed Disney Uncharted Adventure, this multi-player, multi-day game is an evolution of the Midship Detective Agency aboard the Disney Dream and Disney Fantasy. But instead of holding a plastic card in that game, you’ll use your mobile phone via the ship’s free WiFi network. Like the previous game, your family will need to complete tasks to unlock enchanted portraits and portals throughout the ship. But what makes Uncharted Adventure different is that games will trigger magical reactions from decor that otherwise looks stationary. No spoilers, but just remember that Cinderella’s glass slipper in the lobby isn’t what it seems. And though a phone is required as the main tool of the game, this adventure is designed to make kids look up and spend quality time together. There’s even a flash mob-style finale with the game’s villain off screen. As in, real life, real-time on the ship.