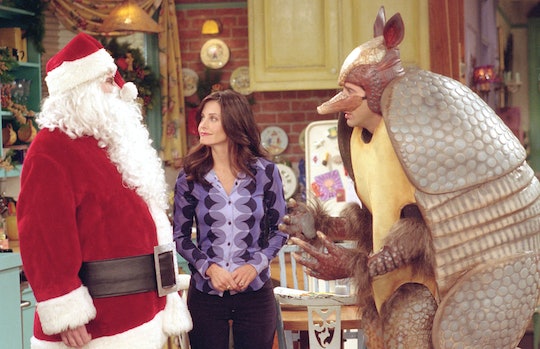 Holiday episodes are a time-honored tradition in the sitcom world and, truly, there was no sitcom that ever sitcomed better than Friends. Over the course of 10 seasons, Rachel, Monica, Phoebe, Ross, Joey, and Chandler felt like people we knew, and the holiday episodes always had a special place in our hearts. Here are all the Very Special Yuletide episodes of Friends you can marathon watch this year.

There Are 10 Holiday Episodes of Friends

As the holidays approach, Ross decides to get a pet monkey (bet you forgot just how early into the show Marcel makes his first appearance!) and the gang plans their New Years Eve party, implementing a strict “no dates” policy. But as the holidays progress everyone winds up connecting (or reconnecting) with someone they hope to kiss at midnight... except Ross.

Monica and Rachel aren’t in the best place financially this year, and decide to hand out homemade cookies in lieu of cash tips to their paperboy, mailman, superintendent, etc... which doesn’t go over too well. Meanwhile, Phoebe learns the truth about her father, including where he lives, and she sets off to visit him with Chandler and Joey.

Just as Rachel quits her job at Central Perk (we also forgot she worked there for three seasons!), Joey finds a job at a Christmas tree lot, which offends Phoebe’s hippie sensibilities. Meanwhile, Ross accidentally breaks the leg of a “Brown Bird” scout named Sarah, and takes over selling cookies for her so she can go to Space Camp.

Ross is struggling with a long-distance-ish relationship with a woman from (you guessed it) Poughkeepsie (for you non-New York people, that’s a town about 2 hours north of New York City). Chandler agrees to help Rachel find a casual fling among his friends at work. Monica, feeling disrespected at work, hires Joey just to publicly fire him, but runs into trouble when Joey realizes what good tips he can make by keeping the job. Phoebe tries to write a Christmas song for her friends.

Ross, bored on sabbatical, and Joey attempt to write a script together... but are challenged by “creative differences.” Phoebe, determined to spread holiday cheer by dressing as Santa and collecting money for a charity, starts to get tough with donors. Rachel finally manages to ask Danny out (or, rather, Monica asks for her), but discovers Danny’s relationship with his sister is creepy and disturbing.

Joey’s love interest, Janine gets hired to be a “party person” at the pre-taping of Dick Clark's New Year's Rockin' Eve and invites Joey, Monica, and Ross to come along. Joey plans to kiss Janine at fake midnight to see if she likes him as much as he likes her and Monica and Ross plan to fulfill their dream of dancing on camera. Meanwhile, Rachel, Phoebe, and Chandler search Monica and Rachel’s apartment for the holiday gifts Monica has hidden.

When Ben gets his first “big kid bike,” Phoebe reveals that she’s never had a bike of her own, prompting Ross to buy one for her. However, in addition to never owning a bike, Phoebe also never learned to ride one. Meanwhile, Monica becomes popular among her (heretofore unknown) neighbors by giving them holiday candies and Rachel gets in trouble with HR when her joke evaluation of her assistant, Tag, is accidentally turned in chock full of sexual comments.

When Ross has his son Ben for the holidays, he decides to teach him about Hanukkah. But Ben was really looking forward to a visit from Santa, prompting Ross to try to find a Santa costume at the last minute... when there’s nothing left but an armadillo costume. As this is going on, Phoebe tries to convince Rachel to move back in with her.

It’s a comedy of errors (isn’t it always?) when Ross’ girlfriend Mona seems to want to level up their relationship by sending a holiday card out with Ross just as Ross is attempting to pump the breaks. Speaking of breaks, Chandler pretends he and Monica have broken up so that she doesn’t have to socialize with his lewd boss, who takes Chandler on a debaucherous boys’ night out to help him forget all about Monica. As he’s running wild, so too are Rachel's pregnancy hormones, which have her wanting to sleep with someone... maybe Joey?

This flashback episode – featuring moments from past holiday episodes and other classic Friends segments – centers around the fact that Chandler has to spend Christmas in Tulsa to get paperwork done for a job he hates... with Wendy, his attractive co-worker who attempts to seduce him.

You Can Stream Friends On HBO Max

Your friends will always be there for you, but since HBO has exclusive rights to the series, if you want to stream the episodes you’re going to have to have an HBO Max account.

You Can Also Buy The Series

If, however, you prefer hardcopies (and, come on, you know you’re going to watch these episodes over and over and over again), you can buy the complete series on Amazon.