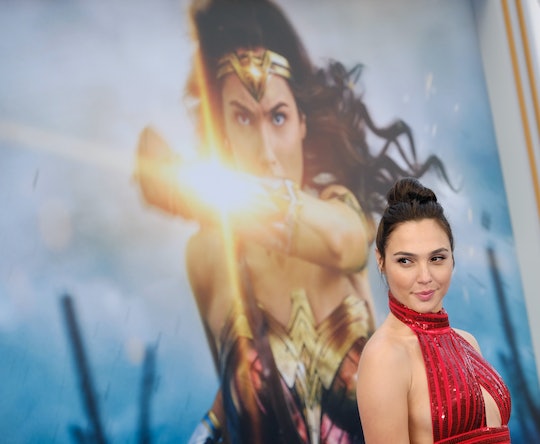 "I couldn't have done the movie without my family."

Wonder Woman's little ones are superheroes in training. You might have missed it, but Gal Gadot's daughters appear in Wonder Woman 1984 in sweet and adorable cameos towards the end of the film.

The girls' appearances come at approximately 2 hours and 22 minutes into the movie, which is currently out in theaters and available to stream on HBO Max. In the scene with her daughters, Gadot's character, Diana Prince, also known as the powerful superhero Wonder Woman, walks through a snowy town, where she gets hit by a snowball. This snowball is thrown by her 9-year-old daughter, Alma, and the film's director, Patty Jenkins' son, Ace, according to TODAY. Moments later, Gadot's husband, Yaron Varsano, and their 3-year-old daughter, Maya, appear on screen on a carousel together.

Gadot explained the significance of having her kids in the film during an interview with media personality, Kevin McCarthy. "It meant a lot, especially in that very scene," she said. "I have two daughters, both of them appeared — my oldest appeared with Ace, Patty's son, and then my youngest one, with whom I was pregnant with during reshoots of Wonder Woman, the first one, was there with my husband."

"To have them captured in the film with me, because they are a part of it, meant a lot, and it's an amazing, amazing souvenir that we will forever cherish," she added.

As Gadot told McCarthy, the actress was pregnant with her youngest daughter while filming the first Wonder Woman, which premiered in 2017. In an interview Marie Claire that same year, Gadot said that she hid her pregnancy for as long as possible because she feared "special treatment." This meant that she would discreetly hide her morning sickness and show up to work in sunglasses to help with her "hormone-induced migraines."

"I gutted it out," she explained to the magazine. "I started to come to set with sunglasses. I had this jug of water with huge pieces of ginger. One of the producers kept on asking, 'Why are you drinking potato water?' They thought I'd gone Hollywood."

Now, three years later, Maya is part of the Wonder Woman sequel, set in the mid-80s. In Wonder Woman 1984, Gadot stars as Prince, an anthropologist at the Smithsonian Institution in Washington, D.C. by day, who just so happens to fight crime as Wonder Woman by night. Gadot explained to McCarthy that having her husband and daughters on set with her meant a lot. "This movie is more than just a movie for us," she said. "It completely changed my life and the amount of labor and thought and emotions that we put into the movie is a lot. I couldn't have done the movie without my family."