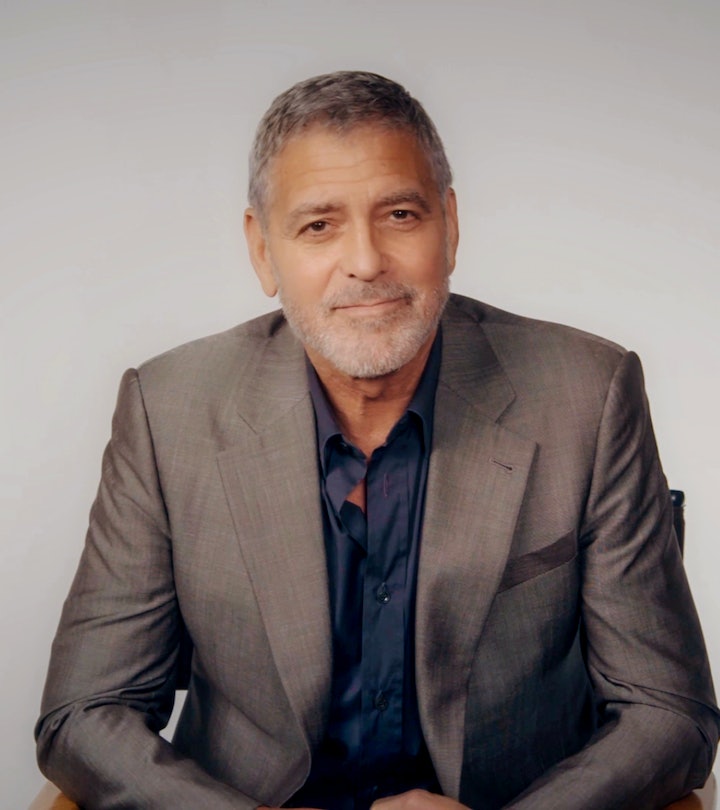 The actor's 3-year-old son barged into his interview with GQ, earning a coveted spot in the magazine.

George Clooney may have been named Icon of the Year by GQ, but because that year is 2020 he's also a parent struggling to work from home while his kids interrupt him. Yes, Clooney's 3-year-old son interrupted his GQ interview, earning a sweet — and all too relatable — mention in the magazine.

Like many of us, Clooney is working from home and conducting virtual meetings in his living room — and like parents everywhere, he's being interrupted by his kids. The 59-year-old actor and director recently took a break from editing his latest film The Midnight Sky to speak virtually with GQ's Zach Baron for the magazine's Men of the Year issue. But the pair hadn't been chatting long before Clooney's son, Alexander, wandered into the room.

According to Baron, this is where the interview goes a little off the rails: "Clooney gathers his son in his lap, and for a while he forgets about me and just talks to his boy," Baron wrote.

“You've got chocolate on your face. Do you know that?" Clooney asked his son. "What is that? Did you have chocolate? Yeah? You did? Hey, Alexander? Let's see. How old are you now —15?”

“No,” the young boy responded.

“How old are ya?” Clooney prompted.

“Three. Because I got my birthday.”

“Yeah, you had your birthday!"

And like any parent, Clooney can't help but show off his son's talents.

The exchange is an adorable peek at what Clooney is like as a dad, something the actor told GQ he'd previously assumed wasn't in the cards for himself.

“I was like, ‘I'm never getting married. I'm not gonna have kids,’” Clooney told Baron of his mindset following his 1993 divorce from Talia Balsam. “I'm gonna work, I've got great friends, my life is full, I'm doing well."

Indeed, Clooney once told People he didn't "have that gene that people have to replicate," referring to the internal pull to have children that others may feel.

But Clooney's attitude toward life changed dramatically when he met human rights lawyer Amal. "I didn't know how un-full [my life] was until I met Amal," the actor told GQ. "Then everything changed. And I was like, ‘Oh, actually, this has been a huge empty space.’”

Although once America's most beloved bachelor, Clooney hasn't been shy about declaring his love for Amal. The actor previously told The Hollywood Reporter that he'd known fairly early on in their relationship that he was going to ask Amal to marry him. He's since embraced both fatherhood and life as a married man but has admitted to initially feeling scared about how fragile his newborn children appeared.

But from the looks of Clooney's most recent interview with GQ, it seems the actor has settled into fatherhood, embracing both the mess and unpredictability of his children — even when trying to get through a video call.