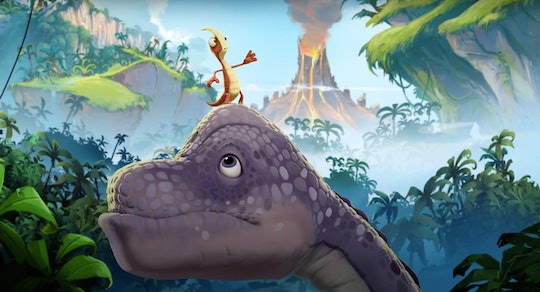 This fun, new season of the hit show will take your kids on a prehistoric adventure.

If your kids can't get enough dinosaurs, you'll be happy to hear that more dino content is on its way! A brand new season of Gigantosaurus is heading to Disney Junior next week and an exclusive preview shared with Romper will have your kids chomping at the bit to start watching.

For those not in the know, Gigantosaurus is a pre-school series that follows four young dinosaurs by the names of Rocky, Bill, Tiny, and Mazu as they embark on one adventure after another while en route with their herd. With varied personalities and skills, your kids are sure to relate to one of the precocious dinos. Along with growing in their friendship, the gang does everything together from mapping the stars to identifying flowers along the way.

With a focus on soft skills such as developing independence and individuality, there is plenty for human kids to learn from these scaly counterparts. Change is coming with the new season, but the group is sure to have the chops to face whatever comes their way.

The exciting, exclusive clip below provides a bit of insight into what the four friends will be getting into during the second season. When the four friends find a mysterious monument to a dinosaur named Roger the Record Breaker, they are eager to learn more about this "super dinosaur" and break a few records of their own. With 100 records to choose from, will the young dinosaurs manage to top Roger in any of the categories?

Along with record breaking, the new season promises new characters, new locations, and a new "baddy" for the group to take on. If that doesn't have you sold, the series will also introduce some adorable baby dinosaurs.

Gigantosaurus Season 2 is coming to Disney Junior on Monday, Jan. 4.