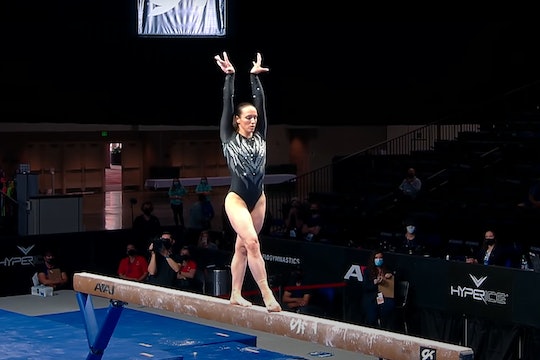 Gymnast Chellsie Memmel Is Showing The World What Moms Can Do

In her first competition in nine years, the 32-year-old mother of two has her sights on Tokyo.

As the Tokyo Olympics draw near, athletes throughout the country are competing to qualify for coveted spots on U.S. teams. But few sports are more competitive — or more popular — than women’s gymnastics. At the U.S. Classic in Indianapolis last week, hopefuls gave it their all, including Simone Biles in her gravity-defying Yurchenko double pike. But another Tokyo hopeful has caught our attention as well: Chellsie Memmel, a 32-year-old mom of two who has come out of retirement after nine years and absolutely crushed it on the vault. Here’s what you need to know about this remarkable athlete, and why she’s gone viral on social media.

Memmel is the daughter of two gymnastics coaches and her father, Andy Memmel, remains her coach to this day. She began competing in 1999 and quickly began racking up medals, including 2005 world all-around champion and 2003 world champion on the uneven bars. Few gymnasts boast more medals than she does — she’s tied with Shawn Johnson for seventh most-decorated female gymnast in the country of all time.

In 2008, she made the U.S. Women’s Gymnastics team for the Beijing Olympics. During training, she suffered what USA Gymnastics referred to as a “minor ankle injury” and, as such, only competed on the uneven bars. It was later revealed that she she had competed on a broken ankle, according to The Washington Post, which didn’t stop her from helping to secure her team’s silver-medal finish at the games.

She retired from gymnastics in 2012. She married Kory Maier in 2013, and the pair have welcomed two children, Dashel, 5, and Audrielle, 2.

She Wasn’t Initially Planning A Comeback

Speaking with TODAY, Memmel said she would have laughed at the idea of competing again, for the Olympics no less, even a year ago. Coming out of retirement was a gradual decision. Getting back in the gym began as a way to get back in shape after having two children. She began “Chellsie Challenges” on social media, including on her Instagram page in 2018. But things progressed. “I just started playing gymnastics a few times a week,” she said. The pandemic also played a role in her journey. “With the lockdown, it was the one thing I could control in the craziness that was the world,” she told the news outlet.

As she kept working, she kept having fun, and she wondered what else she could do. What could she re-train herself to do? What could her body handle? Could she learn new skills? And it turns out the answer kept being “yes, you can,” which is something her family knew before she did. “Everybody was on-board,” she told TODAY. “So they were just kind of waiting for me to be like, ‘all right, let’s do it.’”

Whether Or Not She Makes The Olympic Team, She Says Competing Again “Feels Like A Win”

Speaking with NBC Sports, Memmel said that she was happy with her vault and was still pleased overall despite a less than perfect balance beam routine (at one point during the competition she fell off). “I felt really good,” she said. “I’m happy, I put myself out there and I couldn’t have asked for a better day.” She said that she’s driven by the love of gymnastics — she’s having fun pushing herself to see what she can do. And she says the experience of competing is tempered — in a good — by her children.

“This time around, gymnastics isn't my main focus,” she told Good Morning America. “I'm a mom first. My life doesn't solely revolve around it right now."

She told NBC Sports that she hopes she can serve as an inspiration to others. “I just want to put that message out to to anybody who thought they missed their chance at something, or didn’t get a chance to try it, or wanted to go back to their sport even just for fun: no one should be stopping you. Don’t hold yourself back.”