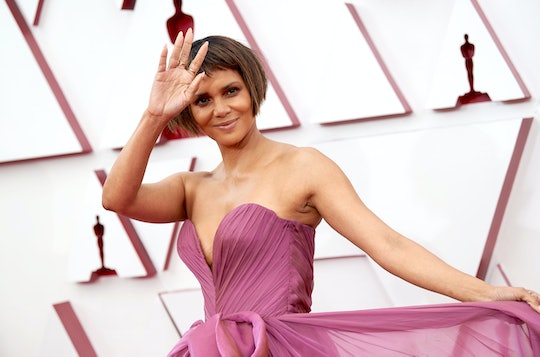 The actress said she never felt more herself than when she was pregnant.

In honor of Mother’s Day, Halle Berry shared a throwback photo of herself during one of her two later-in-life pregnancies on Instagram while reflecting on what she called “the wondrous miracle” of pregnancy. The Bruised star, who has spoken openly of her fertility struggles in the past, described motherhood as a privilege and said she never felt more herself than when she was pregnant.

“I’ll never get over the wondrous miracle of growing a life inside my body as I’ve never felt more myself than when I was carrying my two children,” Berry wrote Monday on Instagram while sharing a photograph of herself showing off her baby bump on a beach. “Motherhood is a real privilege.”

While pregnant with Nahla, Berry revealed to Oprah Winfrey that she and Aubry had been trying to get pregnant for a while. “I’m sort of superstitious, so I saved all of the negative [pregnancy] tests in a drawer,” she told Winfrey during a 2007 interview on the Oprah Winfrey Show. “Don’t ask! I don’t know why, but I did... After about 35 tests we finally got a positive test.”

Speaking to Winfrey, Berry said it was actually her role in Things We Lost in the Fire that spurred her to think seriously about becoming a mother. “It validated that I was meant to be a mother,” Berry said. “Every day I dealt with the character as a mother and thinking as a mother — and not having any children, that was a big leap for me. I haven't really played a mother, a loving, caring mother like this woman was. So it let me know that I must be a mother.”

And although getting pregnant took some time, Berry has said she enjoyed both of her pregnancies. "I felt sexy every single day of every single one of my two pregnancies," she told Lindsay Flores earlier this year during an episode of the pair’s IGTV series Bad & Booshy. "I was walking around naked, I was like, ‘Bam! Look at this. Oh, look at this.’"

In fact, Berry has said she enjoyed pregnancy so much that had she not opted to begin her motherhood journey later in life she likely would have gone on to have more children.

“Had I started earlier, I probably would have had five children,” she told InStyle in 2019. “Or if I hadn’t been busy trying to make movies, I would have been the perfect surrogate. All the hormones made me feel amazing. I was so alive with my purpose and my femininity. I felt like my body was doing what it was built to do.”