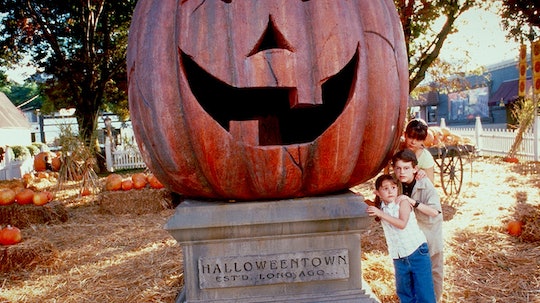 Halloweentown Is A Wholesome ‘90s Classic For The Whole Family

Kids love Halloween — it’s all about candy and costumes, what’s not to love? — so naturally, they are going to want to watch spooky movies, too. As you hunt for something appropriately themed, not-too-scary, and entertaining for both kids and mom and dad, you may remember one of the best movies of the ‘90s: Halloweentown. This Disney Channel Original Movie premiered in 1998 and is a favorite for re-watching every year due to its witty one-liners, nostalgic magic, and tons of amazing Halloween decorations. But is it appropriate for kids? Here’s what parents need to know.

Halloweentown depicts tensions between a teenager and her mom.

Thirteen is typically a monumental age in Disney Channel Original Movies, and Halloweentown is no different. On the verge of her 13th birthday, Marnie (Kimberly J. Brown) discovers that she’s a witch, so she does what any almost-teenager who just realized her mom’s been lying to her for her entire life would do: she runs away.

However, as Common Sense Media points out, this is actually a healthy depiction of kids growing up, explaining, “The main character argues with and defies her mom but also demonstrates her growing independence.”

Kids are going to argue with their parents, but at the end of the day, they’ll come to understand their motivations and grow close with them again. Also, sometimes parents are wrong, and it’s OK to show that too.

A minor scary scene may be too much for the youngest viewers.

There may be witches and warlocks and cab-driving skeletons, but there is nothing truly terrifying in Halloweentown. The most intense scene comes at the very end, when an evil warlock tries to take over the town by bewitching several characters into a zoned-out state in a dark, abandoned movie theater. Marnie and her siblings must work together to find a potion and defy his spell to save Halloweentown.

This is harmless fun for most, but the littlest viewers (or those extra sensitive to spooky stuff) may want to close their eyes or fast-forward during this scene.

Wholesomeness abounds in this Halloween movie.

Halloweentown is rated PG, and it is filled with absolutely delightful moments. Grandma Aggie Cromwell (Debbie Reynolds) brings a magic bag filled with candy and decorations, reads an enchanting book about the magical Halloweentown to her grandkids. But when Marnie overhears that everything’s real, she and her younger brother Dylan (Joey Zimmerman) and sister Sophie (Emily Roeske) sneak off to this other world where creatures and monsters can live in peace without judgement from humans. As an evil warlock tries to overtake the town, the power of family and working together stops him in a classic good vs. evil showdown.

The Cromwell witches are unstoppable, and so is our love for this feel-good Halloween film. If the feeling of bobbing for apples and dancing to “Monster Mash” in your sparkly witch hat was a movie, it would be Halloweentown. A little cliché, a lot of October goodness that will quickly become your family’s newest Halloween tradition.

More Like This
How Old Should Kids Be Before They Watch The 'Christmas Story' Sequel?
Disney Introduced Its First Openly Gay Teen Character In Strange World
Brandy Will Play Cinderella Again In The Disney+ Movie The Pocketwatch
20 Of The Best Christmas Movies For Kids