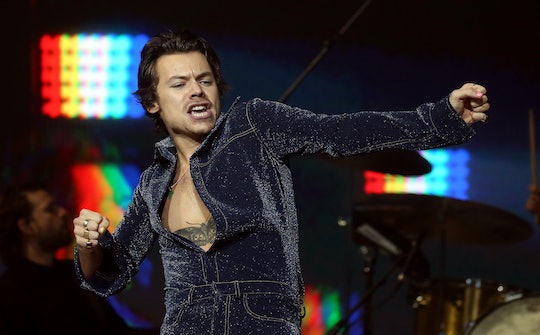 “Lisa, She’s Gay!” Harry Styles Helped A Fan Come Out To Her Mom

This isn’t the first time the English singer has helped a fan reveal something to their family.

Harry Styles helped a fan come out to her mother during a recent show in Wisconsin. Prompted by a sign the fan was holding, the English singer paused his “Love on Tour” concert in Milwaukee last week to facilitate a sweet moment between one mother and daughter pair with a little help from the venue’s jumbotron. Video of the incident has quickly gone viral on social media.

When the opportunity arose to attend a Styles concert in her home state, 23-year old McKinley McConnell jumped at the chance. At the last minute, McConnell even managed to score a last-minute ticket to Styles’ Nov. 3 concert in Milwaukee for her mother, Lisa Bibik. Knowing her mother would be seated in the audience, albeit in a different section, McConnell made a special sign for the concert — one that asked Styles to help her come out as gay.

While Bibik didn’t know what her daughter had written on her sign, she told WTMJ-TV Milwaukee that she had seen a peek of gold glitter on the sign when the two were in the car. “When Harry Styles was starting to read some of the posters in the crowd, I was watching on the jumbotron, and I could see the gold glitter,” Bibik said. “I started saying to all the people around me, that’s my daughter, that’s her poster!”

Video shared on Twitter by McConnell shows Styles approach her after spotting her sign in the crowd. “What would you like to tell your mother?” the singer can be heard asking McConnell. “Or I can do it if you like.”

After a bit of back and forth with the singer during which McConnell nervously notes “there’s a lot of people,” the two decide Styles will be the one to tell her.

“I can tell her, yeah. No problem,” Styles said before walking across the stage to face the concert venue’s section 201. “Lisa, she’s gay!”

On the jumbotron, cameras captured Bibik waving and blowing kisses to her daughter after hearing the announcement before panning back to show McConnell holding her hands over her heart and seeming to wipe tears from her eyes. “Now, I don’t want to ruin the moment,” Styles added. “But wouldn’t it be nice if you were a little bit closer together?”

Bibik told WTMJ-TV she supported her daughter coming out and admired her courage. “I got the message, and it was just such a beautiful moment,” she said. “Ultimately, you just want your children to be happy. You want [them to have] the basic human rights — to be loved and have joy and happiness, with whomever they would like. I admire her courage. And to make that announcement at such a positive, uplifting event was so memorable. The whole crowd cheered.”

This isn’t the first time Styles, an outspoken advocate for LGBTQ+ rights, has helped a fan to come out. In 2018, Styles stopped a concert in San Jose, California, after reading a fan’s sign that read, “I’m going to come out to my parents as gay because of you.” After getting the fan’s consent and inquiring about their parent’s name, Styles loudly declared, “Tina, she’s gay!” according to a video of the incident shared on Instagram by the fan.

More Like This
Blue Ivy Joined Her Mom Beyoncé On Stage To Perform “Brown Skin Girl”
This Tense Moment Between William & Harry From A Resurfaced Interview Is Going Viral
Prince Harry Says He’s Worried One Of Prince William’s Kids Will End Up As “The Spare”
Marie Kondo Gives Up Tidying Post-Kids, Sparking Joy For Moms Everywhere
What Parents Are Talking About — Delivered Straight To Your Inbox