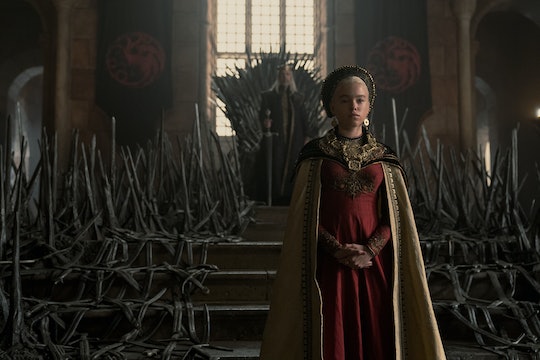 What Parents Need To Know About House Of The Dragon

Like its predecessor, the HBO series is graphic on every level it can be.

It’s been three years since the hit series Game of Thrones ended in one of the most highly criticized ways possible, but that hasn’t stopped fans of writer George R.R. Martin from giving this world of Ice and Fire another shot. House of the Dragon, a series that takes place about 200 years before the events in Game of Thrones, debuted Aug. 21 to the largest audience for any new original series in HBO history. The first episode has now been seen by over 20 million viewers. As of Aug. 26, before the second episode even aired, the series has been renewed for a second season. But is House of the Dragon appropriate for kids and family viewing? Here’s what you need to know.

**Warning: Spoilers for the first episode of the series are below.**

House of the Dragon is absolutely not for kids.

Normally, we don’t like to be quite so decisive in our recommendations, because every family is different and you’re going to know what’s best for your kids. That said, in this case, we feel very comfortable flat out stating that kids below high school age definitely shouldn’t watch House of the Dragon — either with you or on their own (so go ahead and make sure that mature content on HBO is password protected). The series, like its predecessor, is graphic on every level it can be. While gritty good fun for mature viewers, little kids can wait a few years to catch up on the drama.

Of course, anyone who’s seen, or at this point even heard tell of Game of Thrones — either the original HBO series that first aired in 2011 or the first book in the Song of Ice and Fire series that was first published in 1996 and will be finished probably never — is probably aware that the franchise is well known for complex characters, compelling stories, and lots of blood and boobs.

House of the Dragon tells the story of a family feud.

Like the original series, House of the Dragon is both fantastical and full of very real political intrigue. The story begins with the reign of Viserys Targaryen I. That name may be familiar to you: Viserys I is the namesake of Danaerys Targaryen’s brother, whom we last saw being murdered by Khal Drogo with molten gold back in Season 1 of Game of Thrones.

This Viserys is somewhat less awful, but just as hapless, and he has a succession problem. His long awaited son dies shortly after birth (along with the king’s wife, Aemma). After reckless and insulting behavior from his existing heir, the cunning and ruthless Prince Daemon, Viserys names his daughter — the teenage dragon rider Princess Rhaenyra — his successor. This is seen by many as a dangerous move; a woman has never sat on the Iron Throne and, indeed, the idea of it wasn’t well received the last time it was tried when the king’s cousin, Princess Rhaenys, was passed over by the lords of the land.

And if only these were the realm’s only problems: invaders from across the sea threaten major trading routes. Members of the King’s small council each seem to have ambitions and machinations of their own. And Prince Daemon, refusing to relinquish his claim to the throne, has taken a small army to his fortress on Dragonstone, the ancestral seat of House Targaryen.

House of the Dragon is based on a section of George R.R. Martin’s Fire and Blood, a prequel to Game of Thrones.

Despite not finishing the original book series (the most recent of seven alleged installments, A Dance With Dragons, came out in 2011), Martin has nevertheless built an enormous and detailed world, spanning centuries and continents, which is detailed in The World of Ice and Fire, an illustrated guide to Westeros (the imaginary country where the events of the series mainly take place). Fire and Blood, which reads as a history of the reign of House Targaryen, goes into further detail on the stories that predate Game of Thrones.

In classic Martin fashion, however, the book only covers the first half of the family’s 300-year rule. A second book will hopefully complete the story (someday) but the good news is that the entirety of “the dance” has already been written, so the source material is all present and accounted for.

Just two episodes in, the show has proven to be a worthy inheritor of the graphic original series.

In Episode 1 alone, we see pretty graphic sex scenes (in a high-end brothel, no less, so there are other graphic sex scenes happening in the background), violent and bloody tourney jousts (we definitely see chunks of skull go flying), and a C-section that will haunt our dreams for weeks to come. All and all, just another day in Westeros!

Based on the original story by Martin — is full of epic battles, tawdry affairs, and betrayals that are sure to prompt plenty of “spicy” words — we can expect to see more of the same moving forward. Of course, the main characters of House Targaryen live by their words: “Fire and Blood” so... it’s not like all of this mature and graphic content is coming out of the blue.