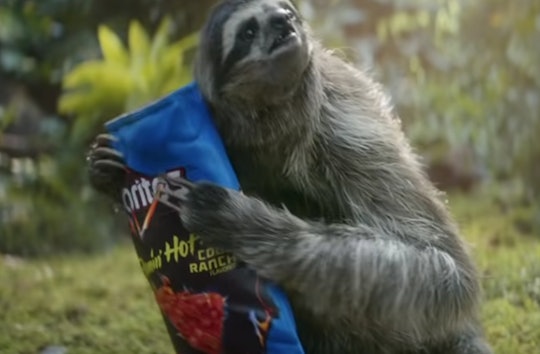 Kids Want To Rewatch The Super Bowl Doritos Commercial? We Got You.

You’ll have Salt n Pepa stuck in your head for days.

The Super Bowl commercial for Doritos Flamin’ Hot Ranch and Cheetos Flamin’ Hot was an instant hit with my 10-year-old daughter, and your kids are probably just as into it. In fact, we can virtually guarantee they’re going to want to rewatch the Doritos Super Bowl ad.

The commercial is freaking hilarious. A birdwatcher, willing to climb trees to get a look at some majestic flying creature, accidentally upturns her backpack, spilling Doritos and Cheetos onto the forest floor. Curious animals creep closer, lured in by the alluring fragrance of the salty, spicy chips. Upon tasting, the animals are transformed as if by magic. They begin singing and dancing to the tune “Push It” by Salt n Pepa. Water buffalo, a crocodile, a deer, a grizzly, and even a sloth start rocking out to the peppy hip hop song. You can’t help but smile as you watch these animals hit their groove while sampling the spicy, cheesy chips. My daughter’s favorite part was when the birdwatcher tried to get her chips back, and the sloth found a spurt of speed, grabbing the Flamin’ Hot Ranch Doritos and darn near flying up the tree with the bag.

And as a fan of the Flamin’ Hot chips, and all things spicy, all I can say is, “I get it.” If there was any snack chip worth risking your little deer life by eating it next to an apex predator, it’s a Flamin’ Hot Cheeto. Though, I don’t know if the magic in the chip negates the predator drive. I certainly hope so.

But either way, your kids are going to want to watch it over and over again. Luckily, it’s available on YouTube and you know it’ll get plenty of GIF action on Twitter and in reactions. Hey, maybe you’ll get your kids to get really into some *good* music with this development.