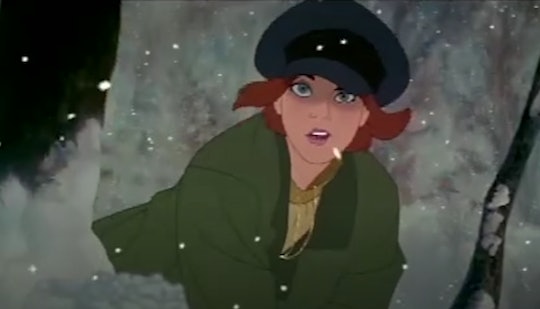 Anastasia Is Officially On Disney+

The classic flick is finally available to stream.

After not being included in its extensive library for far too long, you can now finally find Anastasia is on Disney+ and add it to your weekend's watchlist. And if you don't have Disney+, don't worry — there are still a few ways to watch it.

Released in 1997, Anastasia tells the story of an orphan named Anya hoping to find out if she is really the long lost Russian princess, Anastasia. But on her journey, she finds unexpected love, which complicates the matters of her identity.

The film is a musical, so there is no shortage of catchy songs to sing along to and it's also rated G and recommended for children ages 6 and older, according to Common Sense Media, so it's a great movie to add to watch on family movie night.

It's Now On Disney+

As of Dec. 4, the 1997 film is finally on Disney's streaming platform. (And after you watch Anastasia, you can check out the entire Disney princess collection on Disney+.)

Even Though She's Not An Official Disney Princess

Although the movie is about a Russian princess, Anastasia is not actually a Disney princess, according to ScreenRant. This is because the film was made by 20th Century Fox and not Disney, as Polygon explains. So, you won't see Anastasia walking around the Disney theme parks or get to ride on an Anastasia ride at Disney World. But, Disney and 20th Century Fox did merge in 2019, which is why the film is now on Disney+, according to Polygon.

You Can Rent Or Own It, Too

If you would rather rent or own Anastasia, there are options for you, too. You can rent the animated film on YouTube, iTunes, Google Play, and Vudu for around $3.99 or purchase a digital download for around $9.99.

However you do it, revisiting this old, favorite animated film is fairly simple.