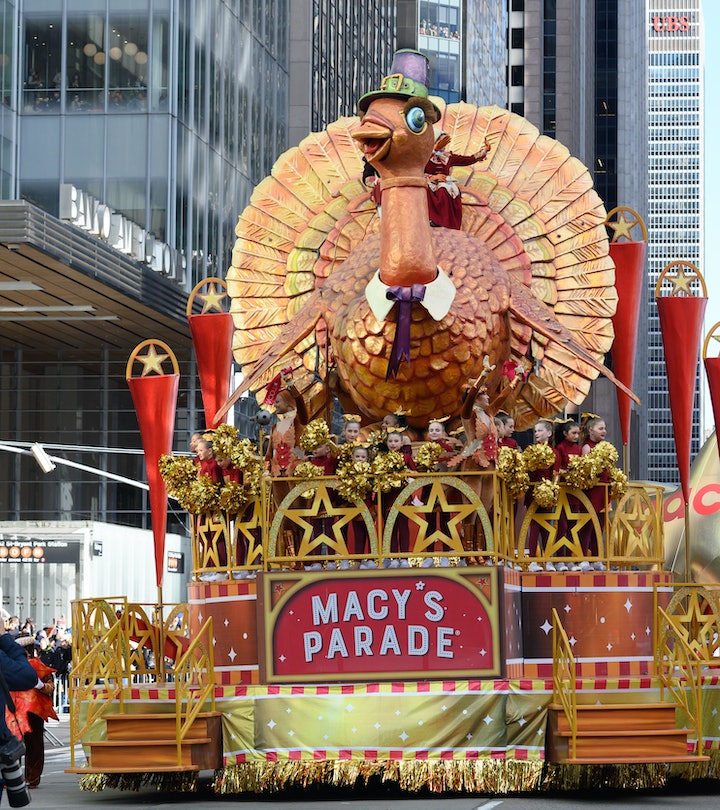 But it will look different, so here's everything you need to know.

While the ongoing pandemic has certainly changed how many Americans are celebrating the holidays this year, it hasn't canceled the Macy's Thanksgiving Day Parade. Of course, a number of robust health and safety measures designed to limit the potential for community spread mean this year's parade is sure to look different than it has in years past. One major change? No in-person parade viewing. But while you won't see crowds gathered on the sidewalk, families around the country can still catch their favorite character balloons by tuning in to watch the 2020 Macy's Thanksgiving Day Parade on television and online.

For many families, nothing says Thanksgiving like the Macy's Thanksgiving Day Parade. The annual early-morning event, which traditionally features floats, balloons, student marching bands, and a variety of musical performances, has been a part of U.S. holiday celebrations since 1924. And although this year's event won't be an actual parade — in an effort to keep large crowds from gathering in person, Macy's has forgone its traditional 2.5-mile parade route through New York City — it still promises to be a fun and festive way of officially kicking off the holiday season.

How Can I Watch The Macy's Thanksgiving Day Parade?

Families who've cut the cable TV cord can still catch all the magic thanks to Verizon, the parade's official sponsor. Verizon will live-stream the Macy's Thanksgiving Day Parade on their YouTube channel and official Twitter account starting at 9 a.m. ET.

What Exactly Will Be Different About The Parade This Year?

Along with canceling the traditional 2.5-mile parade — an event Macy's has said draws more than 3 million in-person spectators each year — Macy's has also significantly reduced the number of people participating in the event by roughly 88%. All high school and college marching bands have been cut from this year's parade (and given spots in next year's event) in an effort to avoid participants having to travel amid the pandemic. Instead, the parade will feature performances from local cultural and professional marching and musical ensembles.

Much of this year's parade will be produced specifically for television on a closed set over the course of several days, giving performers and participants a better chance at practicing social distancing as they'll be performing in smaller groups over the course of multiple days rather than altogether on one day. Celebrity appearances — and in some cases performances — are expected to include Dolly Parton, Pentatonix, Goo Goo Dolls, Patti LaBelle, and many more. This year's event will also feature pre-taped performances from a number of hit Broadway musicals, including Hamilton, Ain't Too Proud, Mean Girls, and Jagged Little Pill. Parade viewers will also have the chance to witness the high kicks of the Radio City Rockettes

Of course, it wouldn't be a Macy's Thanksgiving Day Parade without the retailer's famed balloons and floats. While the parade's balloons have traditionally been flown by handlers numbering well into the dozens, current COVID-19 guidelines make a crown of that number unadvisable. Thankfully, Macy's has rigged a fleet of special vehicles to float its giant character balloons this year, meaning your kids can still expect to see Charlie Brown, Snoopy, and the rest of the gang.

Why Not Just Cancel The Event Altogether?

OK, so, yes, there's been a few big changes to the Macy's Thanksgiving Day Parade this year. And some might argue that, in reimagining the parade as a television-only event, it just won't have the same magic. But because 2020 has turned out to be such a hard year for so many, Macy's wasn't ready to throw in the towel on their biggest holiday event.

"Macy’s believes in celebration and the joy of marking milestone moments with family and friends," Susan Tercero, the executive producer of Macy's Thanksgiving Day Parade, said in a statement announcing the retailer's intention to modify its event amid the pandemic. "Under the unique challenges of these unparalleled times, we felt it was important to continue this cherished holiday tradition that has been the opening act to the holiday season for generations of families. While it will certainly look different in execution, this year’s Macy’s Parade celebration will once again serve its historical purpose — to bring joy into the hearts of millions across the nation.”

With many celebrating the holiday alone or away from extended family, the Macy's Thanksgiving Day Parade may be just the thing needed to infuse a bit of festive magic into a strange and unusual holiday season. Catch it online or on television Thanksgiving morning.