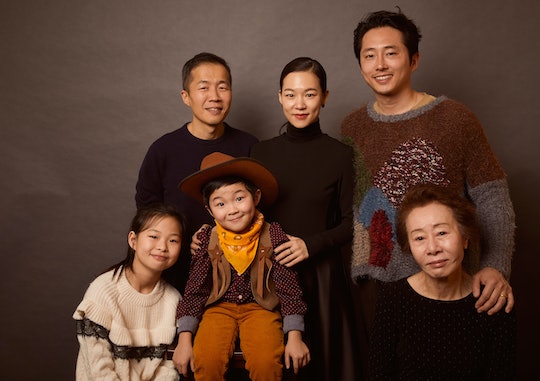 How To Watch Minari, A Powerful Tale Of The American Dream

This touching film gives viewers a glimpse into the lives of Korean Americans.

Minari, nominee for Best Picture at the 2021 Academy Awards, is the powerful story of a Korean American family relocating and working to make their home in the Ozarks. Wondering how to watch Minari? It is available on quite a few streaming services, if you're willing to pay.

Minari tells the tale of the Yi family, a Korean American family that chases its own version of the American Dream on an Arkansas farm. Suffice it to say, the life change brings with it a slew of challenges that the Yis face and overcome in the Ozarks. It is through these experiences that the family learns how strong they are together and what makes a house a home.

While one of its stars, Youn Yuh-jung, took home an Oscar, Minari was also nominated alongside the following movies in the Best Picture category: The Father, Judas and the Black Messiah, Mank, Nomadland, Promising Young Woman, Sound of Metal, and The Trial of the Chicago 7. If you’re making your way through the list of films nominated for Best Picture, there are fortunately a few ways to watch Minari, one of the most talked about films of this year.

Minari Is Available To Rent

Minari is currently available to rent on the following platforms for $19.99: Amazon Prime Video, iTunes and Apple TV, Google Play video, on the streaming service Vudu, through the Fandango site, Xbox, and the Redbox digital app.

Here's how you can watch the Golden Globe winner, Minari.

Minari Is An American Film

Earlier this year, the powerful film brought home the Golden Globe for Best Motion Picture in a foreign language, but the nomination alone sparked backlash. Critics argue that the film was not correctly categorized, as it is an American film written and directed by an American man. But because most of the dialogue in the movie is in Korean, the Hollywood Foreign Press Association determined that it was ineligible for Best Picture, forcing it into the foreign language category and raising questions about racism in Hollywood. Actor Daniel Dae Kim described the categorization on Twitter as "the film equivalent of being told to go back to your country when that country is actually America."

Minari Has Gotten A Lot Of Buzz

In addition to winning a Golden Globe, Minari has been raking up the awards this year. Scene-stealing actress, Yuh-Jung Youn, took home the award for Best Supporting Actress at the BAFTA Awards and Screen Actors Guild Awards and could do the same at the Academy Awards.

Beyond Best Picture, Minari is nominated for five other Academy Awards: Best Performance by an Actor in a Leading Role, Best Achievement in Directing, Best Performance by an Actress in a Supporting Role, Best Original Screenplay, Best Achievement in Music Written for Motion Pictures. Lead actor Steven Yeun has already made history by being the first Asian American to be nominated for an Academy Award in the Best Actor in a Leading Role category.

Yuh-jung Youn’s role as the grandmother who comes along to help the family overcome the adversity they face in Arkansas earned her the Oscar for Best Supporting Actress and it was a surreal moment for her. Her win made history as she is the first Korean to take home the coveted award.

"Me being here by myself I cannot believe I'm here ... let me pull myself together. Thank you to the Academy," she said in her acceptance speech on Sunday. She went on to explain that she doesn’t believe in competition and has great respect for the other nominees in the category, including Glenn Close. Along with her Academy Award, Youn’s performance in Minari also landed the actress a Screen Actors Guild Award and a BAFTA.

If you're looking for representation on the screen, Minari is sure to open your eyes to the experience of Korean American immigrants and struggling families alike.

This article was originally published on March 1, 2021