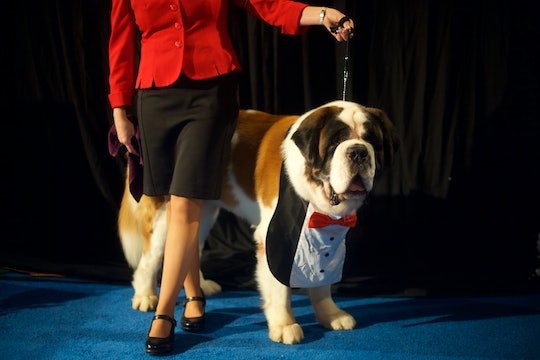 Yes, The National Dog Show Is Airing On Thanksgiving

And here's how to watch the talented pups in action...

If watching the National Dog Show is a part of your holiday traditions, you're in luck. Although the pandemic has certainly put a damper on many celebrations this year, you can still watch the 2020 National Dog Show on Thanksgiving and keep the family tradition alive while safely hanging out at home. And whether you're a longtime fan, or a first time viewer, catching the the Kennel Club of Philadelphia's National Dog Show will be quite easy.

You Can Watch The National Dog Show On NBC

The dog show will air on NBC this year, like it has since 2002. The previously recorded show will air on Thursday, Nov. 26 — Thanksgiving Day — from 12 to 2 p.m. local time. Be sure to check your local listings for an exact channel number.

Like previous years, the National Dog Show will air directly after the Macy's Thanksgiving Day Parade (also on NBC), providing families with a morning filled with entertainment that the whole family will love.

You Can Also Stream The Dog Show

If you don't have cable, you can also stream the National Dog Show online. The competition will simultaneously air on NBC's website, and on nbcsports.com, in addition to airing on the NBC and NBC Sports apps. However, you will need a working cable log in to watch this way.

Alternatively, it will be airing on NBC's channel on Hulu Live and YouTube TV, so if you have subscriptions to either, you will be able to catch it in real time. If you can't catch it on Thanksgiving afternoon, you can always check NBC Sports' website after the broadcast for highlights from the show

Don't be surprised if this broadcast looks a little different this year. A few changes have been made due to the coronavirus pandemic. For example, there won't be any spectators in the audience (so you won't see any close-up crowd reactions) and the entry pool will be a lot smaller. This year, around 600 dogs will compete, which is a far cry from the 2,000 dogs that typically compete each year, according to the Kennel Club of Philadelphia. And as expected, masks will be worn by participants (the human ones, of course).

Although the winner might be different this year, too, you can expect the broadcast to remain relatively unchanged. Tune into the National Dog Show Thanksgiving afternoon to see which dog wins Best In Show.