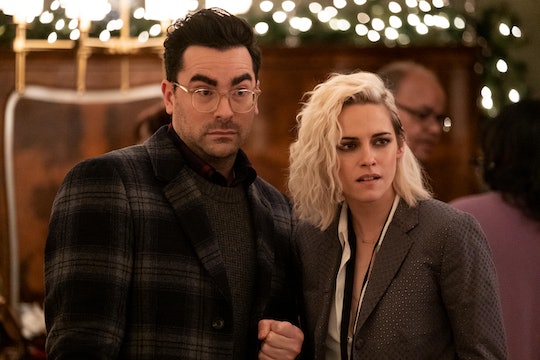 Oh, and it stars Dan Levy from Schitt's Creek.

If you've seen one romantic comedy, you've seen them all — and that's the best thing about them. Beat-for-beat story arcs, archetypical characters — there are certain things we expect and, generally speaking, they're delivered. Rom-coms are the macaroni and cheese of movies: there's not much to them, but they're so good and deliciously comforting. Based on the trailer, Happiest Season, the holiday romantic comedy that will premiere on Hulu on Nov. 25, appears to be no exception... until it is.

It's your standard "meet the family" plot. Beautiful couple (check); quirky family who casually lives in an impossibly beautiful house (check); saucy best friend (two checks because it's Schitt's Creek star and creator Dan Levy); and wacky series of misunderstandings and complications ("Oh no! My parents can't know we slept in the same bed! Hide!" Check). The only difference I could see is that the aforementioned beautiful couple is two lesbians, played by Kristen Stewart and Mackenzie Davis. And that one small tweak means this movie has gone from something I might turn on in the background while I wrap presents to appointment viewing. Finally! Someone has made the Yuletide gay! (You knew I had to make that joke, right?)

The plot is, again, fairly familiar: Abby and Harper are heading to the home of Harper's conservative parents (Mary Steenberg and Victor Garber) to celebrate Christmas. The twist here, however, is that Harper has not yet come out to her family, including her two sisters (Alison Brie and Mary Holland) and urges Abby to pose as her orphaned roommate. (Dan Levy, as John counsels Abby through the ordeal.) Tensions mount as keeping up this farce becomes harder and more painful for both women.

In an October interview with Entertainment Weekly, writer and director Clea DuVall said Happiest Season was written from her own experiences. "I've spent Christmases with partners whose parents didn't know," she told the outlet. "On a journey like coming out, you have no idea what's going to happen or how people will react, and it's scary."

Now, I've only seen the trailer, and I don't know the ending of this movie. But all the trappings of the romantic-comedy genre assure me that, in the end, it's going to work out. Maybe not perfectly (though, like, usually?), but it'll be OK. That's what makes it a romantic comedy. And this is a huge part of the appeal for me, a bisexual woman. Because, certainly, there's no dearth of queer cinema out there. Even big studios have gotten the memo that the LGBTQ+ community exists and — shock of shocks — we also watch movies. But more often than not, these films, especially those produced by mainstream filmmakers, tend to focus on queer pathos that often culminates in something tragic. Death. Violence. Psychological anguish. And those are valid experiences and important stories... but OMG can we just let queer girls hunker down on the couch with a pint of Ben & Jerrys and watch a light-hearted rom-com with relationships that look like theirs?! Just once?!

Well. Now we have one more in a small (but hopefully growing) roster.