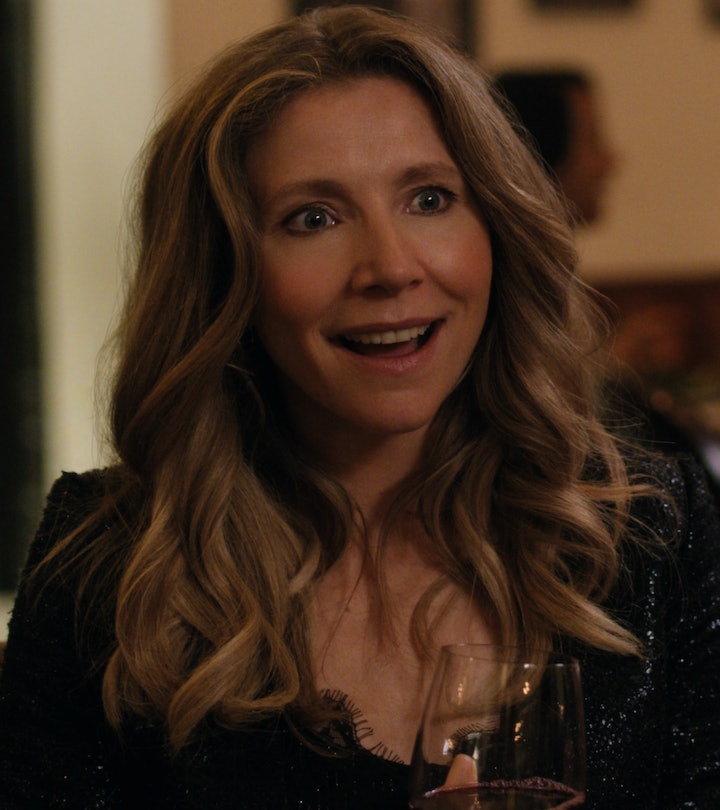 If Sarah Chalke Had The World’s Number, She’d Give It A Call

The mom-of-two on parenting through the pandemic, teaching her kids gratitude (and pratfalls), and her new #1 Netflix show, Firefly Lane

“Waffles, down!” Sarah Chalke yells, our interview interrupted by her dog who, after waiting for the perfect moment of distraction, has scrambled onto the table to gobble up the last of her family’s breakfast dishes. The moment feels like a snapshot from the past year: all of our compulsory house-bound lives interrupted by a steady stream of completely unpredictable moments — sometimes fun, often anxiety-inducing, and frequently pet-related.

“At the beginning of the pandemic, we were quarantining with my sister and her four kids, and three dogs and a cat,” laughs Chalke. “Never a dull moment.”

The everyday moments that make up a life are also the focus of her new Netflix series Firefly Lane, created by Maggie Friedman and shot in Chalke’s hometown of Vancouver, which follows long-time besties Kate Mularkey (Chalke) and Tully Hart (Katherine Heigl) throughout three different timelines: meeting as teenagers in the 1970s, pursuing careers in journalism in the ‘80s, and entering their 40s in the early 2000s, with their relationships, jobs, and relationships to motherhood in flux. Beloved for roles in Scrubs, How I Met Your Mother, and Rick & Morty, Chalke chatted with us recently from her snow-covered home about her own experiences with prioritizing family, parenting during quarantine, and the need for comfort food television during the pandemic.

Note: This interview contains spoilers for the first season of Netflix’s Firefly Lane.

First off, we have to ask you the question everyone has been asking themselves this past year: how are you handling the challenge of parenting in quarantine?

There's days where I'm like, "Oh, we're nailing this,” and then I'm like, "We are definitely not nailing this at all." At the beginning, I had all these plans, right? Like you think like, "Okay, we've got all this time. I'm going to get back into photography, and I'm going to teach the kids another language.”

Then you realize, once you get into the day-to-day of it, oh, just keeping up with the never-ending laundry, and the dishwasher, and the meals. You don't really get to Number 27 on the list. But I think that the most challenging piece, I would say, is that the goalposts for the kids are constantly changing.

For my daughter, it's quarter of her life. She said to me a while ago, "Mama, can you call the world and ask when coronavirus will be over? Then a few hours later she said, "Mama,” and I said, "Yeah." She goes, "Do you have the world's number?"

Every day you're like, "Okay, what are we going to do today?" At the beginning, we were like, "Okay, we're making rainbow pasta,” and my sister did a class on the United Nations and the rights of the child. I did one on cartoon voices with an audition cartoon script. We took my little microphone and the kids all recorded themselves. The other day, I did pratfall classes with the kids. My four-year-old was just so into it. She didn't want to stop. She was just doing laps, just running around in circles, falling.

It will be interesting to see what children remember from the quarantine. As horrible as it is, there’s the positive things that they'll remember from it, from being with their families.

Yeah, I read an article right at the beginning that said that for some kids, they will remember this is the best time of their life because they will have more of their parents than they’ve ever had. It will be really interesting to see what stands out.

One of the first things I did was buy everybody gratitude journals, because I was like, "If we're going to get through this, we’re really going to have to focus on that."

I asked them the other day, you know, “Let's talk about the good things that have happened,” and one of them said, "Oh, we'll never take anything for granted again after this." Before, if I was like, "Okay, we're all going for a hike,” the kids would whine and complain. Now they hike and they can't believe it because we're outside, we're seeing some of their friends, and they're running around with the dogs, and it's like the biggest event.

My son gets carsick and he hates driving in the car, and it was one day he's like, "Mom, let's go. Let's just go for a drive.”

Having kids was always the thing that I wanted the most in my life.

In Firefly Lane, your character goes back to work after spending time away to raise her now-teenaged daughter. Did you relate her concerns, working while welcoming your son in 2009 and daughter in 2016?

I think you always have that sort of concern. Having kids was always the thing that I wanted the most in my life. So, whatever time I needed to take for that and if something was or wasn't going to be there after I was, I felt like this is something that is just I'm going to do regardless. But I think you absolutely have those concerns, because in acting — I mean, sometimes you're lucky enough that they can write [your pregnancy] into a job, or you can work through it. I did that a little bit with [my first child], but with my second, I moved back up to Canada, and then traveled for work. And so Firefly Lane was such a gift because it shot here in my hometown and that was amazing.

It does feel like people are turning to more “comfort food” TV. Less murder, more women’s lives. Not that we don’t love murder mysteries! Do you find yourself doing the same?

Totally. I think that I'm somebody who normally I love watching things that are a little bit dark, kind of edgy and I can't right now. My friends and I are all watching The Bachelor and we've got a text chain about it. I love Queen’s Gambit. I binged that really quickly. That was so great. One of my favorite movies is Booksmart, and I've watched it like three times over the pandemic because it's so funny and it feels so good to laugh right now. But yeah, I feel like the nice thing about Firefly is the fact that it actually takes place in '70s, '80s, and 2001. It has nothing to do with this time period.

The show also focuses on this long-standing female friendship, and between work and our immediate families, it feels like friendships are the other aspect of life that it can be difficult to cultivate. Have you figured out how to stay connected to long-time friends?

We have a text chain called “A Panoply of Practical Preparatory Plans in the Period of Pandemonium in the Pandemic.” We've been actually having Zooms, which obviously everyone's spending way too much time on our screens for work and other things. But we've been trying to have at least every couple of weeks have a glass of wine together on Zoom.

Some of the conversations around Firefly Lane online have also been about Tully’s miscarriage in Episode 8 (“Mawaige”), how the show explored the expectation that women could go through this private, extremely difficult experience, but are then expected to go about business as usual.

I loved how they did it. How she had to go back to work, and then she ends up deciding to share it with the audience and asking how many miscarriages. You just see this visual of all these hands going up. When you see how common it is, and what an unbelievably painful experience it is for women, and, like you said, how you're expected to just move on with your life and life goes on. But you're left with this tragedy.

I was glad the show dealt with it because I feel like, especially when it's something like that that's not talked about a lot, you just don't know who you're going to reach, who it's going to touch. Who's going to feel less alone as a result of watching the storyline or it being talked about. I do think that TV can be a meeting for starting up conversations and you never know what it can open up for people to talk about it.

Firefly Lane is available to stream on Netflix.