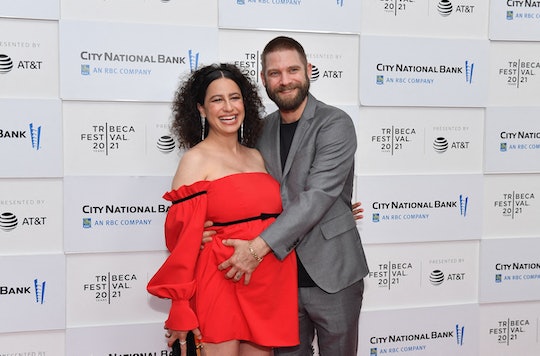 And now she’s all about breastfeeding in compression socks.

A new baby has arrived in Broad City. Actress Ilana Glazer announced on Monday that she’s given birth and welcomed her first child with husband David Rooklin. The False Positive star revealed that her little one actually arrived weeks ago and she’s been living in a postpartum fashion staple: compression socks.

“Been breastfeedin’ in compression socks for the past three weeks, hbu?,” Glazer captioned a photo of herself breastfeeding her newborn on Instagram.

While Glazer shared that her and Rooklin’s little one arrived somewhat recently, they haven’t revealed what they named them or any other details. Rooklin, however, may have announced their child’s birth days before Glazer’s Instagram post on Monday. Last week, Rooklin, who is a scientist and married Glazer in 2017, posted a hand-drawn sketch of their newborn. “Quick sketch of new mom,” he wrote. And on Sunday, he shared a drawing of a mother breastfeeding her baby and captioned it, “mom n babe.”

Glazer’s exciting announcement comes weeks after the release of False Positive, the Hulu-exclusive film that Glazer both wrote and starred in, about a woman who turns to IVF treatments after she and her husband struggle to conceive. But once Glazer’s character get pregnant, she finds that everything is not what it seems.

In real life, Glazer has described pregnancy as “spiritual and beautiful and amazing” while also being “grotesque and scary” to E! News. And in an interview with Entertainment Weekly, she said she was excited to become a parent and be pregnant, especially since she has amazing role models around her. “I’m not afraid to ask a billion questions,” she told Entertainment Weekly in March. “There are certain trends in society of how pregnancy should look — the shoulda coulda wouldas that are put on women all of the time but are so amplified in pregnancy. I’m specifically seeking out the most spiritual healthy and welcoming experience.”

Breastfeeding in compression socks? Sounds as real as it gets.