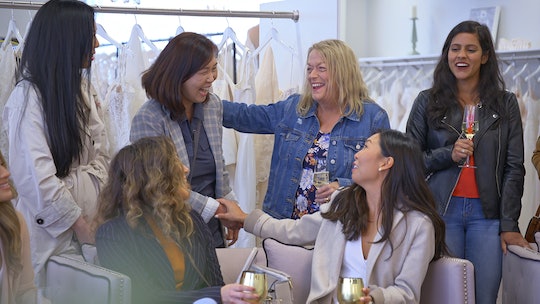 In Netflix’s Love Is Blind, The Moms & Dads Steal The Show

Come for the wild experiment, stay for the real love.

In the promo reel for Season 2 of the Netflix reality series Love Is Blind, an Asian American woman confesses to her shocked immigrant parents about her participation in an “experiment” of 15 men and 15 women — in which the contestants date sight unseen through a wall separating their “pods” — in pursuit of true love and marriage. She goes on to inform them that she is engaged and her wedding is two weeks away.

“I have concerns as a mom.”

“Me too,” the father echoes.

The daughter, Natalie Lee, a 29-year-old consulting manager, tries to convey positivity by holding out her hand and asking, “Do you want to see the ring?”

The mom smacks her daughter’s hand away. “No, I don’t.”

It was a smack heard around the world.

Watching, I couldn’t stop laughing. This is reality TV gold. Mama Lee’s reaction is exactly how I would envision my own mother’s. I was hooked.

From the beginning, I loved the show — but not because of the experiment to find love and marriage. What had me hooked was seeing how the participants' parents responded to their situations.

I loved seeing these real-life Asian American parents on screen, who are loving and concerned for their daughter but do not fall into ‘Tiger parent’ tropes — because real people are not flat, extreme archetypes.

Note: The rest of this article contains spoilers about Love Is Blind, Season 2.

Watching Natalie spring the details about the show and her two-weeks-away nuptials on her parents minutes before introducing them to her new fiancé, I was impressed by their startled but relatively calm reaction. They were protective yet logical. The moment felt genuine, which is actually rare in reality TV. I loved seeing these real-life Asian American parents on screen, who are loving and concerned for their daughter but do not fall into "Tiger parent" tropes — because real people are not flat, extreme archetypes.

In the season finale, Natalie’s father embraces his daughter on the day of the wedding and says, “Of all the things I’ve done in my life, being your dad is my proudest achievement yet.”

Mr. Lee adds, smiling wistfully, “Life is never boring with you. I love it.”

Natalie is already incredibly fortunate to have parental love like this, no matter what happens with Shayne Jansen, the 32-year-old real estate agent she paired with on the show.

I didn’t think it possible, but I was moved even more by another parent from Love Is Blind — Shake’s mom, Sita. From episode 1, Abhishek Chatterjee, or “Shake,” a 33-year-old veterinarian and DJ, is clearly the most superficial person on the show. He’s the only man who openly tries to physically assess the women in the pods, asking them about their size; whether they think he’d be able to put them on his shoulders at a concert. If this isn’t disgusting enough, when he first meets Deepti Vempati, the lovely 31-year-old information data analyst to whom he will later propose, he proudly proclaims that his past partners have all been blond.

Who knows how Shake came to be this superficial and mired in internalized racism, but it was not how his mama raised him.

Shake and Deepti initially bond over the fact that they both have only dated white people in the past. For a while, in the pods, there seems to be hope for Shake, who shares his own insecurities about trying to fit in after immigrating from India as a child. Unfortunately, as soon as they are out in the world, Shake starts telling everyone who will listen that he does not feel an ounce of physical attraction toward Deepti, who according to him, reminded him of his aunt.

Who knows how Shake came to be this superficial and mired in internalized racism, but it was not how his mama raised him. When he has the gall to tell his mother Sita that he doesn’t feel “instinctual, animalistic attraction” to Deepti, his mother says without hesitation, “I'm very much identifying with her more than you.”

Sita schools her son firmly: “[Deepti] can find someone who absolutely loves her the way she is. She doesn't deserve someone who gives her even half a percent less.”

I wanted to cheer. Sita’s words sent chills up my arm and brought tears to my eyes. I was floored by her bluntness, clarity, and wisdom — and grateful that she articulated what her son (and viewers) needed to hear.

Parents of all backgrounds, including Asian immigrant parents like my own, can sometimes be extra. In my experience, they can dote on their children — sons in particular — so much that they are blind to their faults and oblivious when their children are in the wrong in romantic relationships. Sita is clearly not one of those parents, and I wanted to hug her through the screen because of it. As a mom myself, I strive to have that kind of awareness and perspective.

Deepti’s own mother is just as amazing and supportive on the wedding day. “I’m so proud of you,” she tells Deepti, crying. “I just want you to be happy. That’s my brave girl, my sweetheart. I love you, smart girl.”

These are words every woman would want to hear from her mother.

I’m amazed at how the show found people with such incredible parents to be on this program. The families of each of the other final cast members impressed me in their own ways, including Iyanna McNeely’s parents. Iyanna is a 27-year-old program coordinator who has lived through considerable childhood trauma. As a viewer, it was impossible not to cheer for her sweet spirit and wish for her a happily ever after. I admired her parents, who adopted Iyanna as an adult, and who seemed like pillars of strength, support, and love. And then when she first met the parents of her fiancé Jarrette Jones, a 32-year-old project manager, their instant warmth and welcoming made me so happy for her to find in-laws as loving as they seem to be.

If you watch the finale — which is full of surprises — you will learn which of the couples ultimately tie the knot. Whether or not this funny cast of characters find lifelong romantic love through this “experiment,” one thing is clear: most of them are tremendously lucky in love already.