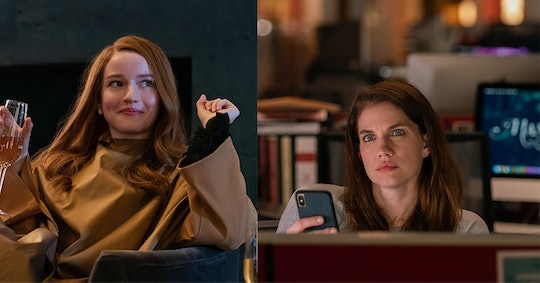 'Inventing Anna' And Parenthood In The Age Of Hustle Culture

The mother and the scam artist are both obsessed with work.

Netflix’s Inventing Anna is based on the true story of Anna Sorokin, also known by her alias Anna Delvey. Sorokin famously conned Manhattan’s elite into believing she was a German heiress with a multimillion dollar trust fund. Meanwhile, she was in reality stealing hundreds of thousands of dollars from banks, hotels, restaurants, and even her own friends. After her arrest, journalist Jessica Pressler, who becomes Vivian Kent in the show, wrote what became a viral essay about her various schemes and cons across the city.

“You’re not special,” sneers the ambiguously accented voice of Anna Delvey to a visibly pregnant Vivian Kent in Episode 3 of Inventing Anna. “People have babies every day. They squat in fields.”

To Anna Delvey, nothing could be more horrifically mundane than having a baby. And she is someone who refuses to be mundane. After all, swollen ankles, leaking breasts, and sciatica don’t go well with Celine.

But wait. This is the 21st century and women can have it all — right? In the new Shondaland series, the answer is a resounding no: The mother and the girlboss simply cannot coexist.

Anna and Vivian form the two distinct heartbeats of the show. Their stories play out in parallel. Anna’s is a world of glamour — private jets, high fashion, and hundred-dollar-bill tips. Vivian, on the other hand, exists within the TV version of investigative journalism — it’s all messy buns, chewed pencils, too many cups of coffee, and late-night phone interviews. But these two very different women do have one thing in common: their all-consuming obsession with success.

Yes, in reality Anna is a con woman and a criminal. But in her own mind, she’s nothing but a driven careerist — as she would probably put it, a girlboss. Her single-minded goal is to create the Anna Delvey Foundation, a new Soho House-esque art club.

Similarly, Vivian is an obsessive workaholic. After an accidental bit of bad reporting, her career is on the line. She needs one great story to redeem herself and resurrect her journalistic reputation. Both women are striving to be exceptional in their respective fields.

If the obsessive careers of Anna Delvey and Vivian Kent form parallel tracks at the center of the show, the undercurrent that courses through it all is Vivian’s ever-growing baby bump.

For Vivian, it is effectively a ticking time bomb — a constant reminder of the end of her career as she knows it. And so, she clings to her career, obsessing over her Anna Delvey story — there’s no better visual representation of this than the detective crazy wall made up of pictures of Anna connected by a web of string that Vivian creates on the wall of the new nursery (a detail that Pressler has since confirmed to be fictional).

“I know we all pretend like it’s not happening, but you do understand that a baby’s going to come shooting out of your hoochie pretty soon, right?” says a blunt co-worker in Episode 1. “Fuck,” Kent replies, as the reality of the situation sinks in.

In the very next scene, Vivian and her husband attend their first ultrasound. It’s a girl, says the nurse, and again Vivian explodes into a stream of expletives. “She’s real. I thought I was going to have it fixed — my reputation — before there was a tiny person I’m required to keep alive and pay attention to,” she explains to her husband through tears. “I want her, I do… I’ve run out of time. And if you tell me my joy at having my daughter is meant to make up for the loss of my career, the loss of the thing that lights up my brain, I swear to God I will smother you in your sleep.”

It’s a startlingly honest picture of the felt reality of motherhood for the modern woman who finds real joy and meaning in her work, and it’s not the serene, magical experience that the fresh-faced momfluencers of Instagram might have you believe.

In Anna’s eyes, Vivian’s pregnancy verges on the grotesque. “Are you pregnant or are you just so, so fat?” she asks during their first meeting. And later: “You get fat. Your face will get fat. It will get huge and ugly. And then baby comes. It happens to everyone. I told you — you’re not special.”

In Anna’s eyes, motherhood is about succumbing to a life of putting others first — a life of conventionality, in stark contrast to the exceptionalism of her particular (if imaginary) brand of “girlboss.”

The conflict between career success and motherhood is nothing new, and at first glance, the show seems to be perpetuating the same old tired message: that women can’t have it all. Inventing Anna raises a provocative question: How does pregnancy and parenthood fit into the era of hustle culture, where our “specialness” is so often defined through our work?

In the universe of Inventing Anna, Vivian Kent’s pregnancy clearly takes a backseat to work, while Anna Delvey’s derision for the choice to have children is made clear. But then again, it isn’t as though choosing career over motherhood is presented as a positive choice. Vivian is exhausted and prone to obsession, and Anna is, well, a slightly delusional con woman. Instead, what the show manages to do is to hint at how our the cultural fixation on work leaves little room for family. When Vivan’s article is finally published, we see her and her husband cooing over it as though it were a baby in a crib.

In an age when we put everything we have into our careers, it’s no wonder that the idea of having it all has begun to feel more like a fanciful dream than a reasonable goal. Maybe the issue isn’t that women can’t have it all, but rather that modern work demands so much of us that having anything else has become close to impossible.