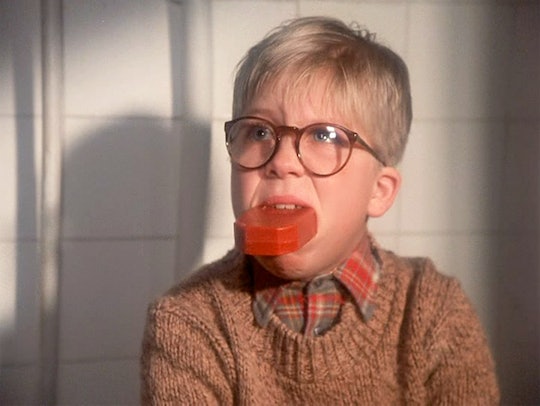 Honestly, a lot is just in how you see the film.

I grew up watching A Christmas Story every year on Christmas Day. TBS would play the film for a full 24 hours, and I cannot recall a year going by where we didn't watch little Ralphie's story. As I got older, got married, and had children, the film's shine lost a bit of its luster, and I wondered if it was even appropriate for my own children to watch.

The plot centers around a family of four in the midwest as they celebrate the days between Thanksgiving and Christmas Day. Mom, Dad, Ralphie, and Randy seem to live a pretty 1940s-era idyllic life where Mom does all the cooking and cleaning, and Dad goes to work to win very major awards. The boys are rambunctious and wily, and at times, petulant and stubborn as children and tweens are wont to be. The overall content of the film at first glance is pretty innocuous. It's your basic Christmas period piece, there's not much real vulgarity even if its implied in many scenes, the only physical violence in the movie is perpetrated by bullies, and the film does a good job of showing why you shouldn't give BB guns to children when Ralphie does, in fact, nearly shoot his d*mn eye out as literally every adult in the film — including Higbee's Santa — warned him about.

If you were going to rate the film for ages, you'd likely say that given that perspective, basically anyone over age 4 could reasonably expect to enjoy the movie. Common Sense Media places the film as appropriate for ages 8+ because of the use of strong language like "*ss" and "son of a b*tch," which honestly seems quaint in this day and age, and nothing they wouldn't hear at your average grocery store trip. (Quite possibly much worse if the store is sold out of something fun.)

The problem however, and the reason I don't show it to my children, isn't what you're likely expecting. It's not the leg lamp, though it is oddly objectifying. While there is a lot of gender stereotyping in the film that I'm no fan of, I think it's safe to say that most tweens in the '40s didn't actually want a fluffy bunny pajama set for Christmas like Ralphie is given — not just the boys. No, instead my reason for turning off the television is in the representation of Asian Americans in the film. It's more than caricature, it's grotesque.

Near the end of the film, the Christmas Day turkey is ravaged by the neighbors' hound dogs, much to the chagrin of the father. The family decides to go out, and the only restaurant open is the local Chinese restaurant. When the family sits at the table, they are greeted by the restaurant's owner and several workers all playing to racist American stereotypes of Chinese immigrants — overly large smiles like those seen in anti-Asian propaganda during the war years.

Their English was bad, pronunciation worse, and the family is horrified as the chef presents a Peking duck to the table, head still attached. When the mother balks and laughs, the Asian whips out a cleaver and beheads the duck right at the table. The waiters then proceed to sing "Deck the Halls" to the family, singing the line "fa la la la la" as "fa ra ra ra ra." The film plays to ideas of the savage Asian immigrant popular after WWII, and it's just plain gross. My Chinese husband, born and raised in the United States, grew up in the shadow of this film, and he told me that not a year went by where someone didn't sing that line to him, or ask if he was going to have duck for Christmas. (Saying nothing of the fact that it's incredibly white-colonizer to assume that he would celebrate the holiday to begin with.) It's not a nice way to grow up, and because the movie normalizes it so casually, it really does seep into the consciousness of the viewer.

If that scene didn't exist, the movie would be OK at best. It's really, really white, fails the Bechdel test with surprising aptitude, and centers the father's role like he's a god. I don't think it's appropriate for anyone, let alone a child, but if you're basing it purely on swearing and violence — 4 and up seems fine, 8 and up if you want to follow Common Sense Media.