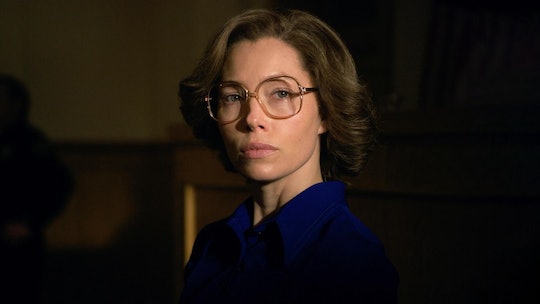 Affairs, murder, and hypnosis are just part of the story, which is being retold in the new series.

Jesica Biel stars in a new true crime mini-series on Hulu ominously titled Candy. But just how “true” are we talking exactly? Is Candy based on a true story? The characters were, in fact, actual people, many of whom are still alive... with one notable exception. Here’s what you need to know as you watch the series.

Who is Candy Montgomery?

A stay-at-home mom from Texas, Candace “Candy” Montgomery and her husband Pat moved to the quiet Dallas suburb of Wylie in 1977. According to an excellent two-part 1984 article published in Texas Monthly that took a real deep dive into the case, this area is referred to by locals as “the country.” An aspirational, quiet, wholesome place to come to and raise a family.

Pat worked for Texas Instruments — earning the modern equivalent of more than $300,000 a year, Texas Monthly explains — while Candy managed the home and two kids, a son and a daughter. As a family, they were active members of the Methodist Church of Lucas. That’s where Candy befriended Betty Gore. Betty, a 30-year-old school teacher, was married with a daughter.

According to the trial, Candy was generally considering an affair for at least several weeks in 1978 before she found the man she wanted to have an affair with, Betty’s husband Allan. The Texas Monthly explains that her attraction to Allan began when they bumped into one another during a church volleyball game, literally. While pretty much every source we found describes Allan as an “unlikely” object of animal attraction (aka he wasn’t traditionally good looking), Candy later said she thought Allan “smelled sexy.” The pair were both married to more reserved spouses and — more importantly — both sexually frustrated, according to Texas Monthly. They began to flirt, though others only really seemed to notice it as such in retrospect.

One day, after a church event, Candy admitted her attraction to Allan and, weeks later, asked him bluntly, “Would you consider an affair?” While initially hesitant, particularly since Betty was pregnant again, the pair began meeting at motels every other week in December 1978, understanding their entanglement was entirely sexual.

After the birth of their second daughter in 1979, Betty sank into postpartum depression, which had afflicted her to some degree since after the birth of her first child. The couple, realizing their marriage needed help, went on a couples retreat with their church, after which Allan broke off the affair with Candy.

The pair had meticulously planned everything about the affair, down to how they would split the costs for motel rooms and what Candy would make for lunch during each rendezvous, according to Texas Monthly. They’d also had a laundry list of reasons they would end their arrangement, including emotional attachment and, simply, if one person said it was over and didn’t give a reason.

Betty was murdered with an ax after Allan broke off the affair.

Betty died on June 13, 1980 and the cause of death was never really in question. She was struck over 40 times with an ax and, horrifyingly, lived through all but one of them, according to coroners. Her baby was in her crib. Her older daughter was playing at her friend’s house — Candy’s house.

The killer was also not in question for very long. Allan admitted to the affair and Candy, the last person to see Betty alive, was arrested within two weeks. While she initially denied the charges, under hypnosis, she admitted to killing Betty in self-defense, claiming that Betty had confronted her about the affair and attacked her with the ax, which Candy had managed to take from her. The hypnotist, Dr. Fred Fason, claimed childhood trauma had triggered rage that led her to strike Betty so many times, according to the 1984 Texas Monthly article. (It should be noted that while repressed memories and hypnosis were considered groundbreaking in the ‘80s and are still used today, many reformers point to the flaws in confessions made while “hypnotized.”)

Candy was found not guilty.

Pleading self-defense, Candy was found not guilty. She and Pat remained married — at least in the immediate aftermath of the trial — and moved to Georgia. The Daily Mail reports that Candy is still alive and working as a mental health therapist.

Candy is one of two mini-series about the murder coming out in 2022.

Both HBO and Hulu have dramatized this story in a mini-series that will be released this year. The cast of Candy includes Jessica Biel as Candy (a role that had originally been given to Elizabeth Moss, who ultimately had to drop out of the project), Melanie Lynskey as Betty, and Pablo Schreiber as Allan. In HBO’s Love and Death, Elizabeth Olsen will play Candy, Lily Rabe will play Betty, and Jesse Plemons will play Allan.

But neither series is the first time Hollywood has interpreted this tragedy. In 1990, the TV movie A Murder in a Small Town drew inspiration from the events that shook Wylie. Though many details were changed, the main character, played by Barbara Hershey, was named Candy.

More Like This
Kourtney Kardashian’s Kids Begged Her & Travis To Stop French Kissing In Front Of Them
Did Michael Peterson Ever Remarry After Kathleen's Death?
These TV Show's Graduation Episodes Will Tug At Your Heartstrings
Quinta Brunson Is Giving Back To The School That Helped Inspire 'Abbott Elementary'