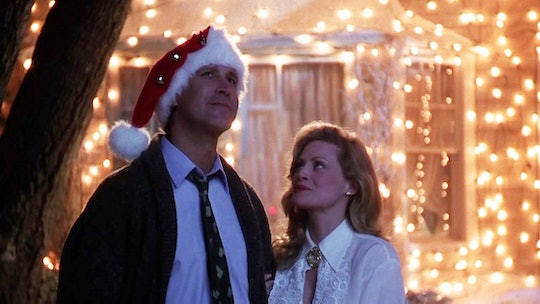 Here's What To Consider Before Showing Your Kids Christmas Vacation

As Christmas Day nears, I personally am preparing by making some hot chocolate, turning on our twinkling Christmas tree lights, and snuggling up under a big cozy blanket on the couch to watch holiday movies. For many, myself included, getting the whole family together to watch some feel-good Christmas films is a beloved tradition. But while there are plenty of kid-friendly movies to choose from, I'm unsure about a few of my favorites. Like, is National Lampoon's Christmas Vacation appropriate for kids to watch?

Sure, it's a hilarious holiday classic, but let's be real: some of the scenes can feel a bit too racy for a little one who is repeating everything they hear, and some slightly older kids may start to catch on to the adult humor throughout the movie. Still, National Lampoon's Christmas Vacation is such a good one that you might not want to keep it from your kids! At the end of the day, that decision is yours alone, but to help you figure it out, let's take a closer look.

National Lampoon's Christmas Vacation isn't your average heartwarming holiday film about a family. The movie is about Clark Griswold (Chevy Chase), a dad and husband who just wants to give his family the perfect Christmas. As he forces them to take part in Christmas traditions, like decorating the house, things slowly start to go wrong.

From the beginning, it feels like a fine family movie to watch. Common Sense Media noted that the opening is actually a cartoon, and there are lot of physical comedy bits and hijinks meant to make the entire family laugh. But once the movie gets going, there are a few naughty words, and also some bits like a lingerie woman showing Clark her panty line and even a mention of Santa not visiting some of the kids because the parents are low on money.

But when it comes to the plot, it's pretty simple. The grandparents show up and start to quickly annoy the Griswolds. When Clark tries to put up a ton of Christmas lights to impress everyone, he ends up causing a huge power outage. Not long after that, their cousins arrive uninvited and with a giant, disgusting dog to live on the Griswold property in their camper. Oh, and then Clark finds out that the Christmas bonus he's been banking on from work may not actually be coming to him, and now his checking account is going to take a major hit.

A whole bunch of other funny moments take place throughout the movie, like Cousin Eddie kidnapping Clark's boss to berate him for ruining Christmas by withholding Clark's bonus and a SWAT team showing up at the end to save him, but I think you might be able to recognize a common theme: most of the humor is really more for adults than little kids (unless your toddler is very advanced and can understand the frustration of work problems).

And then there's the rating. National Lampoon's Christmas Vacation is rated PG-13. The Motion Picture Association noted that a PG-13 rating means "parents strongly cautioned. Some material may be inappropriate for children under 13." IMDB also noted that this particular film includes mild sex and nudity jokes; mild violence and gore (much of it is meant to be funny); moderate profanity; mild references to drugs, alcohol, and smoking; and no frightening scenes. Parents on Common Sense Media rated the movie as OK for kids as young as 11, too.

But again, you as a parent get to make this decision on your own. If you were going by the rating system, it's pretty clear that this film wasn't exactly made with young kids in mind. Not only are some of the references a bit too mature for them, but many of the jokes and situations might just go over their head, so they might not even find it as fun to watch as you do. But then there are kids who don't need the jokes or funny situations to make sense as long as they can see Clark fly off the ladder while putting lights up on the house or a dog chasing a squirrel through the middle of Christmas dinner. Just do what feels best for your family.