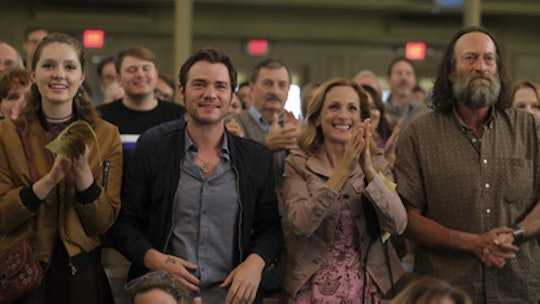 Is CODA Appropriate For Kids? Here’s What You Need To Know About The Oscar Winner

CODA, which stands for “children of deaf adults,” is an award-winning, heartwarming film suited best for older kids.

CODA made history at the 94th Academy Awards, not only taking the award for Best Picture, but marking the first time a deaf man, Tony Kotsur, won for Best Actor. Critics and audiences have hailed the film as a heartwarming, funny, and moving portrait of a Deaf family, but is CODA appropriate for kids? Here’s what you should know before streaming it with your family.

Common Sense Media, a site that gives more in-depth descriptions of film ratings than the Motion Picture Association (and their own age recommendations) agrees with this assessment, suggesting the movie would be appropriate for viewers 13 and older. While the site acknowledges that the film is “heartwarming” and chock full of diverse representation, positive role models, and positive messages, it also has its fair share of salty language (spoken and signed) and sex, but no nudity (including an awkward but funny scene where a character walks in on her parents having sex). There’s also some drug use (cannabis).

The film tells the story of high school senior, Ruby, the only hearing person in the loving, tight-knit family of her, her parents, Frank and Jackie, and her brother, Leo. She works with her family on their commercial fishing boat and the family relies on her to translate for them as needed. But as graduation approaches, she must choose between her passion for singing and staying with her family. While the details are specific to Deaf culture, the overarching themes of compassion, endurance, and communication will resonate with any family.

CODA is actually a remake of a French film.

In 2014, La Famille Bélier received mixed reviews. Though it was a resounding box office success, the Deaf community found the film’s use of hearing actors for deaf roles insensitive and, moreover, detracted from the quality of the film, with one critic noting that Deaf audiences required subtitles, as they could not understand the actors French sign language. CODA adapted the basic premise of La Famille Bélier (taking home an award for Best Adapted Screenplay in the process), setting the film in Glouster, Massachusetts and making sure to cast deaf actors in deaf roles.

You can stream CODA on Apple TV+.

If you want to watch the movie, you’ll need a subscription to Apple TV+. Incidentally, CODA also made history for being the first streaming-only movie to win Best Picture.