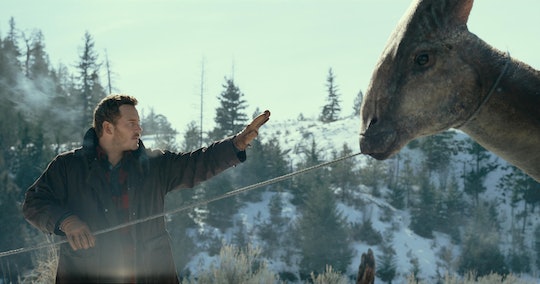 What Parents Need To Know Before Seeing Jurassic World Dominion

Laura Dern, Jeff Goldblum, and Sam Neill return to the franchise in the final film of the Jurassic era.

When it comes to maintaining peace among humans and dinosaurs all over the world, it’s all hands on deck. In Jurassic World Dominion, which premieres in theaters June 10, your favorite stars from Jurassic World and the heroes of Jurassic Park of your childhood come together for one epic, nostalgic-filled finale of the beloved saga. Chris Pratt (Owen Grady) and Bryce Dallas Howard (Claire Dearing) join forces with Laura Dern (Ellie Sattler), Jeff Goldblum (Ian Malcolm), and Sam Neill (Alan Grant) among others in this star-studded cast. But before you bring your dinosaur-loving family to this new movie, you may be wondering: is Jurassic World Dominion appropriate for kids? Here’s what parents need to know.

Directed by Collin Trevorow, with Steven Spielberg and Alexandra Derbyshire as executive producers, Jurassic World Dominion is rated PG-13 for language, intense sequences of action, and some violent scenes. This means younger kids, especially kids 5 and under, should probably not see this film.

Jurassic World Dominion picks up four years after 2018’s Jurassic World: Fallen Kingdom, when Isla Nublar was destroyed. According to the official logline, “Dinosaurs now live — and hunt — alongside humans all over the world. This fragile balance will reshape the future and determine, once and for all, whether human beings are to remain the apex predators on a planet they now share with history’s most fearsome creatures.”

It is the same type of action/sci-fi adventure movie as 2015’s Jurassic World and Jurassic World: Fallen Kingdom, so chances are, if your child handled those movies well, they will most likely do OK in this movie, too.

How it’s tamer than the previous two Jurassic World films.

If your child is sensitive to the subject of dying, know that Jurassic World Dominion has less “body count” than the previous installments.

Still, according to Common Sense Media, you can “expect plenty of jump scares, human-eating dinosaurs, and epic predator-on-predator fights, but there's a slightly lower body count in this installment than the previous ones.”

There is some explicit language.

The film has some explicit language, including occasional use of “sh-t,” “bullsh-t,” and “a—hole,” according to Common Sense Media.

Themes of science and teamwork are prevalent.

Science is cool in Jurassic World Dominion, and like previous films, themes of “science, nature, ethics, teamwork, and prioritizing people over profits,” is encouraged, as well as “integrity and perseverance,” according to Common Sense Media. There are also more leading women in this film.

It’s the last film in the series.

More Like This
Kristen Bell Just Hinted That 'Frozen 3' Is Maybe (Hopefully!) In The Works
10 Of The Raddest Movies From The '90s To Watch On Girls Night
Marcel The Shell Is Officially A Movie Star
Where Are The Toys Of Toy Story Today?