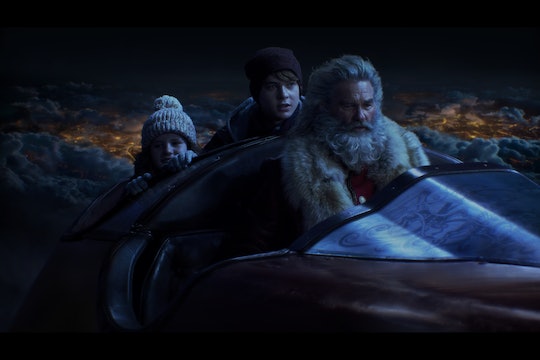 The Christmas Chronicles Is A Family Movie, But Here's What You Should Know

In Netflix’s original holiday action/adventure, The Christmas Chronicles, Kurt Russell tackles the role of a more modern, rugged, edgy Santa. “Hold on,” you say. “Edgy Santa? Is that a thing? How edgy? Too edgy? Is The Christmas Chronicles appropriate for kids?” Don’t worry: we’re here to help you figure out if this Christmas movie should be added to your holiday lineup.

The Christmas Chronicles is rated PG

The Motion Picture Association of America (MPAA) classifies PG as films requiring “parental guidance” due to material that may be too mature for young children. But… that may not be strictly speaking helpful in and of itself. Fortunately, Common Sense Media, gets more specific in their recommendations, and rated the film for kids 10 and older, noting that while the movie does not contain any sexual content or depictions of drinking, smoking, or drug use, there is a bit of mild violence (a couple of fights, sleigh crashes, a carjacking) and slightly spicy language (“what the hell” and an almost-but-not-quite uttered “s-word,” for example) in the film. But overall, you won’t find any overly scary scenes, nudity, or abusive language in The Christmas Chronicles. Still, because all families are different, it’s up to you as a parent to decide what’s appropriate for your family — if you are concerned about your children getting scared or upset, it might be a good idea to jog through the movie before you show it to them.

What Is The Christmas Chronicles About?

Produced by Home Alone and Harry Potter and the Sorcerer’s Stone director, Chris Columbus, who brings his usual adventurous tone to the film, The Christmas Chronicles tells the story of two siblings — Kate (Darby Camp) and Teddy (Judah Lewis) Pierce — who decide to catch Santa (Kurt Russell) on camera on Christmas Eve. While filming him, they sneak onto his sleigh, and secretly tape him from the backseat. But when they are discovered, they inadvertently startle Santa and his reindeer, causing the sleigh to crash. After realizing that they’ve jeopardized the holiday, the kids pull an all-nighter with Santa and his elves in hopes to save Christmas.

The Cast Has Said The Movie Is Family-Friendly

When the movie came out in 2018, Lewis and Camp told Build that The Christmas Chronicles is a kid-friendly movie. “I was so happy, because this is like one of the first things that actually my friends can see,” said Camp, whose last role had been opposite Reese Witherspoon in Big Little Lies (decidedly not kid-friendly viewing). Lewis added that he was inspired to do the film because the director, Clay Kaytis, said he was making a genuine movie not geared to any demographic. “One thing that Clay said really resonated with me — He said ‘We’re not making a children’s movie, we’re making a movie that we all love and believe in and it’s going to be appropriate for children,’ and I think that’s really a huge statement about this film.”

Of course, at the end of the day, the appropriateness of the film really comes down to your family's values, your parenting style, and your kids’ temperament and maturity level. If you find The Christmas Chronicles to be innocent enough, then you have the perfect holiday adventure to watch with your family. If you feel the movie is a little too mature for your kids, then you can always wait until next year to give it a go.

This article was originally published on November 22, 2018