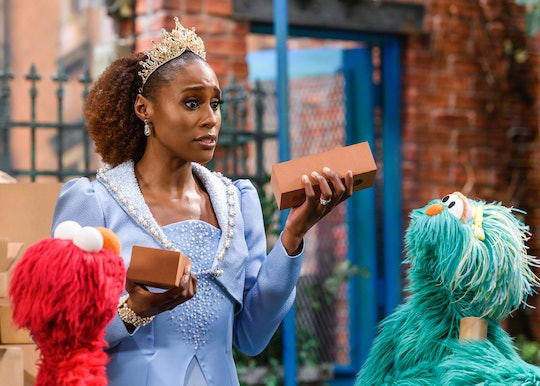 The Insecure star plays a queen without a castle in the latest episode of Sesame Street.

The 51st season of Sesame Street continues to be a star-studded affair. But I'm not talking about Big Bird, Elmo, Cookie Monster, or Oscar the Grouch, although all four are major celebrities in their own right. In the latest episode, Insecure star Issa Rae visits the gang on Sesame Street to get help with a problem of royal proportions. The Emmy-award nominated actress plays a queen who doesn't have the resources needed to build a play castle for her muppet daughter. Can the gang help her out?

In the latest Sesame Street episode, Elmo, Rosita, and Cookie Monster are sorting through various cardboard containers for recycling when they spot a royal queen, played by Rae, looking rather distressed as she holds two bricks.

As it turns out Queen Rae is sad. She needs help solving a problem: how can she build a play castle for her muppet daughter when she only has two bricks. Thankfully, Elmo, Rosita, and Cookie Monster are willing to help. Using Sesame Street's season motto of "I Wonder, What If, Let's Try," the gang gets to work repurposing the cardboard they had planned to recycle into a beautiful castle fit for a muppet princess to play in.

Sesame Street's 51st season premiered Nov. 12 on HBO Max. It is expected to be the beginning of a two-year curriculum plan rolled out by the series that focuses on playful problem solving, building critical thinking skills, and equipping young children with the tools and resources to handle challenges in school and in life. Throughout the season, muppets, guest stars, and human cast members will face obstacles — such as Rae's castle-building conundrum — and learn to face these problems with curiosity, creativity, and perseverance under the season's motto of "I Wonder, What if, Let's try."

“We are proud to announce our newest episodes of Sesame Street, designed to entertain and educate kids as we help them build curiosity, creativity, and persistence – an especially crucial focus as families continue to face unprecedented challenges,” Steve Youngwood, COO and president of media and education at Sesame Workshop, the nonprofit education organization behind Sesame Street, said in a statement released earlier this year.