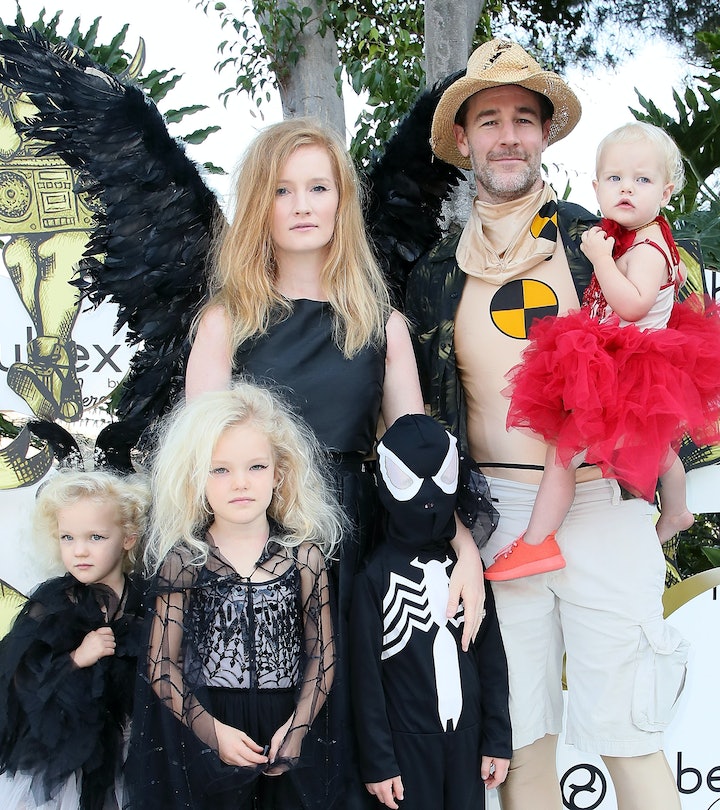 James Van Der Beek is overjoyed to be celebrating the birth of his sixth child with his wife Kimberly after the couple experienced two consecutive late-term pregnancy losses. On Monday, the actor announced he and Kimberly had recently welcomed a son, whom they named Jeremiah.

“Humbled and overjoyed to announce the safe, happy arrival of Jeremiah Van Der Beek,” the actor announced on Instagram while sharing a series of photos and a video of his newly grown family. The actor already shares 11-year-old Olivia, 9-year-old Joshua, 7-year-old Annabel, 5-year-old Emilia, and 3-year-old Gwendolyn with Kimberly, his wife of more than 11 years.

In one video, Van Der Beek’s 3-year-old daughter Gwendolyn lists off a few tidbits of information about her new baby brother, including his name and the fact that “he doesn’t know when his birthday is.” Gwendolyn then tells the camera she calls her new brother “dinosaur,” eliciting laughs from both of her parents offscreen.

“We’ve been calling him Remi, btw — not ‘dinosaur,’ Van Der Beek noted in his Instagram caption.

Despite being fairly active and open on social media, previous pregnancy losses lead the Van Der Beeks to keep news of Kimberly’s pregnancy to themselves, telling only close family and friends. “After experiencing late-term pregnancy loss twice in a row (both at 17+ weeks), we kept this one quiet,” Van Der Beek explained. “Truthfully, I was terrified when I found out.”

According to Van Der Beek, a doctor diagnosed the two pregnancy losses Kimberly experienced as having been caused by an incompetent cervix. “I asked him what kind of misogynistic old dude invented that term and he laughed, which made me like him even more,” Van Der Beek said of the doctor.

Known more commonly today as a weakened cervix or cervical insufficiency, the condition involves the premature dilation and effacing of the cervix. According to Yale Medicine, it can lead to pre-term labor and pregnancy loss. However, it can be treated if detected early. In some cases, a progesterone supplement may be all that is needed to hold off premature labor. Others may require a simple surgical procedure known as a cervical cerclage, according to Yale Medicine.

Van Der Beek said his wife had a cervical cerclage done, which was later removed when her pregnancy was full term. “[Kimberly] gave birth naturally on the ranch,” Van Der Beek wrote on Instagram. “And here we are.”

In celebrating the birth of his son on Monday, Van Der Beek also took a moment to remember the two children his family lost.

“Each child brings their own energy, their own manifestation of consciousness, their own lessons,” he wrote. “The ones we lost each gifted us with different pieces of the puzzle… leaving us that much more grateful for the ongoing master class we get to enjoy with this sweet, wise little one.”

More Like This
Here's The Best Time To Remove Your C-Section Tape
Can The Way You Sleep Really Turn A Breech Baby?
These Darling Baby Boy Names All Start With The Letter "D"
Can You Help Your Baby’s Hair Grow?