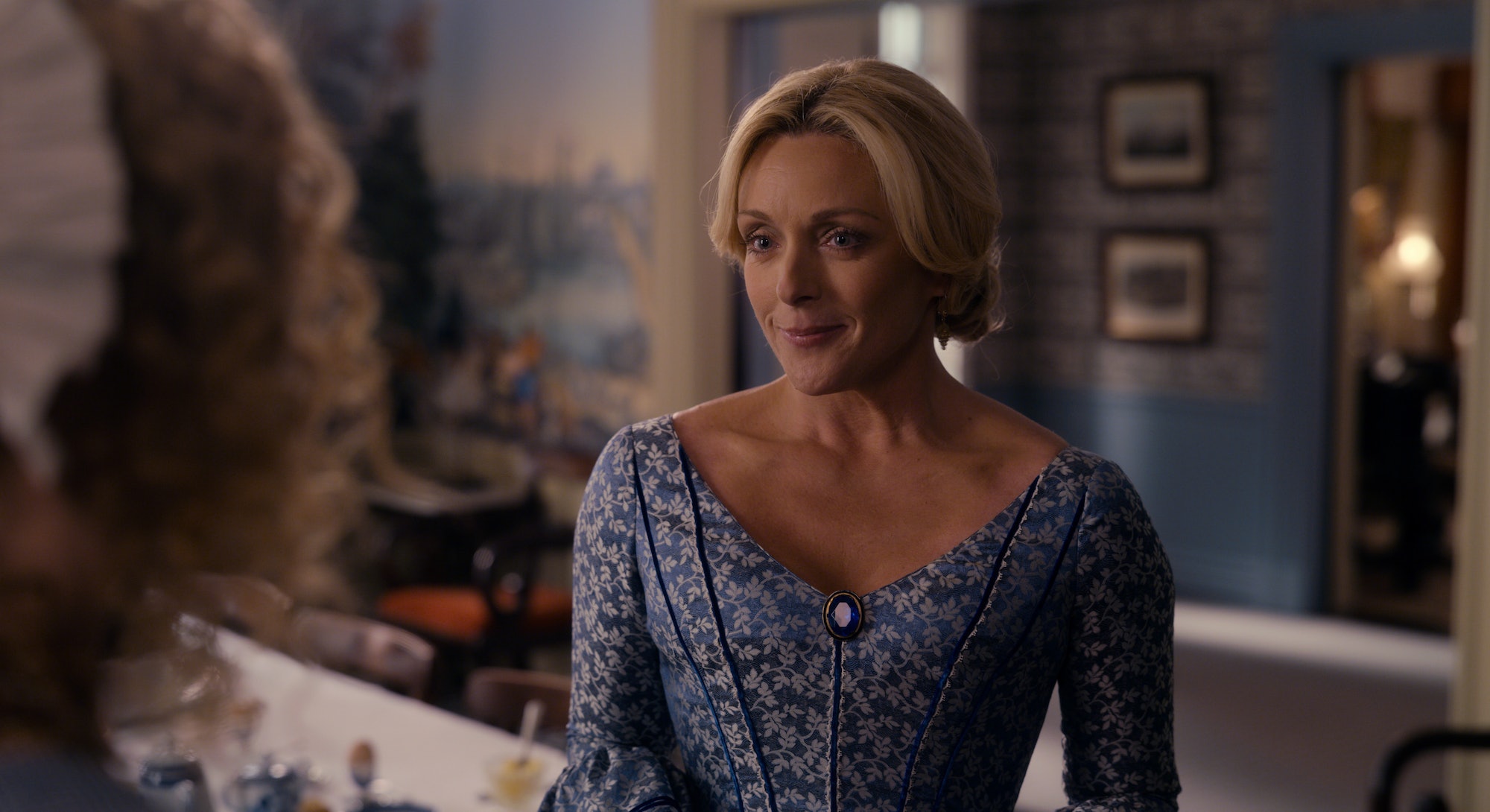 Mothers in popular culture are too often saints — or evil step-parents. Krakowski's Mrs. Dickinson defies all the clichés.

“Feels good to be home,” says Emily Dickinson, played by Hailee Steinfeld, at the start of the second season of Apple TV’s Dickinson. She’s just stepped out of the carriage after traveling with her father by train to see an eye doctor who has advised her to stay out of the sun and stop writing so much. Emily’s not going to listen, of course.

Inside the house, her mother, played by Jane Krakowski, beelines for her daughter at the door: “What did the doctor say? You have no idea how hard this has been for me.” Tense, fretful, self-centered, caring — Krakowski as Mrs. Dickinson is all of it at once. Emily barrels up the stairs past her family. She has to get up to her room and write. Mrs. Dickinson objects in vain: “Why are you rushing? You’ve been away for three days. Don’t you want to say hello?”

Mrs. Dickinson, aka Emily Norcross Dickinson (her daughter is her namesake), would like to stop all the clocks, please. This is her house. But it’s not only her house — not at all. Dickinson is a show about the powerlessness we share when we love inside of families.

This show doesn’t vault Emily Dickinson out of her complex time; it places her squarely in it.

A sense of powerlessness also presses in on the walls from the outside world; Season 2 takes place in 1859. The party’s almost over, and the show, dedicated to a giddy swirl of familial and social life told in the vernacular of millennials, knocks at its own delights. Death is close, war is close, patriarchy and paternalism reign, and the terror that Black citizens of Amherst live with daily is in lockstep with white money and pleasure. This show doesn’t vault Emily Dickinson out of her complex time; it places her squarely in it. She is coming of age, experiencing her own visions and blindnesses. She sees what she can see. And her mother, for the most part, lets her be herself.

Not so in Season 1 — and it’s worth it to start at the beginning. The show begins with Mrs. Dickinson sensing that her daughter is going rogue. She attempts to do the only thing she can think of, which is to marry Emily off. But Emily is punk: Steinfeld plays her whole body as an insult to her mother’s Proper Lady handbook. Emily dashes outside, shirks her chores, loves her best friend, Sue, courts friendship with anyone worthy who comes her way (including Death), and rips into societal hypocrisies. Her primary mode of rebellion — writing and publishing poems that sound and look like nothing ever written before or since — threatens her father’s vigilant upkeep of the Dickinson reputation.

Emily is daddy’s girl, and for that, Mrs. Dickinson suffers. Mrs. Dickinson has to work around her husband’s love for his poet daughter. What to do when your husband puts your daughter’s desires before your own? Jane Krakowski plays Mrs. Dickinson’s pain with her amazing face; there’s empathy and anger, clarity, and yearning roiling within her. The show draws here from what we know about the real Emily Norcross Dickinson: Personal expression was not her strong suit, and family, captained by her husband, was everything. When Emily confronts her mother about her repressed rage, Mrs. Dickinson replies, “Unlike you, I am not in the habit of constantly expressing myself.”

The icky, gnarled, daily love the whole family works through with their separate intelligences is center stage.

This show could have easily belittled Mrs. Dickinson’s suffering, tossed her off as narcissistic or zany. But while she does have awesome, full-blown Jenna Maroney moments here and there, Dickinson is too good to leave Mrs. Dickinson out of dramatic complexity. This is the complexity that created Emily Dickinson, after all, and creator and showrunner Alena Smith is up for the challenge. The icky, gnarled, daily love the whole family works through with their separate intelligences is center stage. And the younger set, the millennial players who carry Dickinson, are all hot for literature and language for escape. We’re ever reminded that this is Amherst, Massachusetts, home of Amherst College, where everyone in the Dickinsons’ privileged orbit is reading or writing. (The Amherst appetite for printed matter runs parallel to Emily’s private poem production.) By the end of Season 1, the father-daughter Electra complex has cooled off; Mrs. Dickinson gives up the suitor game and makes room for the fact that she has, and will likely always have, an alien poet daughter who writes upstairs and occasionally bakes.

We’re all a lot — this is the refreshing subtext of Dickinson.

This is what makes this show such a pandemic gem: The Dickinson house is only so big and yet it's the inescapable, well-appointed center. Love between family members surfaces and deepens. So does cruelty and indifference. Family is heaven and hell, and the house can feel expansive or airless, depending on the moment. “I was the slightest in the House—/ I took the Smallest Room—,” Emily Dickinson wrote some time before the Civil War. Jane Krakowski’s Mrs. Dickinson would raise a perfect arched eyebrow at this. Home is never paradise, despite our best intentions, and peace is often kept at the expense of a woman or two. We see what Emily begins to see in this second season: Her parents’ needs and desires and projections might choke her own. To get her space, Emily immerses herself in her Smallest Room, in her writing, and grows weirder and weirder in the eyes of her Amherst peers. “She’s a lot,” explains one to a new guest on the scene when Emily mysteriously ditches a party after being asked to recite a poem.

We’re all a lot — this is the refreshing subtext of Dickinson. Every main character is changing in a rapidly changing industrial pre-Civil War America. No one can see where they are going, and visions, even Emily Dickinson’s, are hazy and unclear. What will the world be like tomorrow? The parallels to our current pandemic and our reawakening to the peril that structural racism and white supremacy present to humanity and democracy, are all here. The adults are as bewildered as the kids.

My favorite episode so far has Mr. Dickinson (Toby Russ) out bird-watching, falling into a deep hole on his property. Mrs. Dickinson, fetching water, finds him. Instead of rescuing her husband, she seizes the opportunity to drop into the same hole and force her husband into a conversation about their relationship. It is a plaintive, honest moment between two married people with too many responsibilities, children, debts, pets, and aches between them.

The title of this episode is an Emily Dickinson first line: “The Daisy follows soft the Sun.” Mrs. Dickinson is no daisy. She knows that sometimes you gotta get out of your routine, drop into the husband hole, and hash it out.

Dickinson is now streaming on AppleTV+.