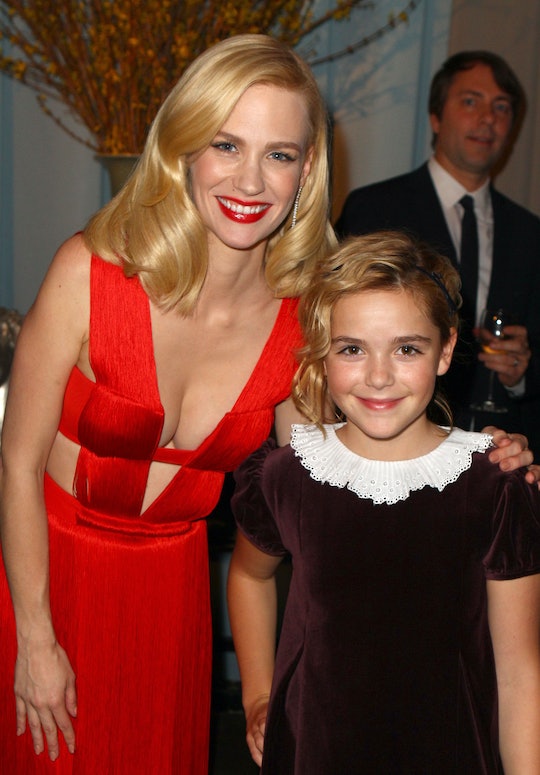 Of course, they rocked it.

In honor of the 2021 Golden Globes on Sunday in a very pandemic-friendly way, actresses January Jones and Kiernan Shipka recreated their Golden Globes from a decade ago. The Mad Men actresses, who played mother and daughter on the TV show, posted photos of themselves on Instagram wearing the exact same looks that they wore to the 2011 Golden Globe Awards. And, as expected, they looked amazing then and now.

In January 2011, Jones matched the red carpet when she wore a stunning, scarlet-hued Versace gown with a plunging neckline to the Golden Globes. Since then, 10 years have passed and Jones has become a mother; she gave birth to her son, Xander Dane Jones, in September 2011, nine months after wearing the dress. And on Sunday, she wore it once again from the comfort of her home. "10 years later and it still, (sorta), fits," Jones captioned the photo. "Part of the problem..," she added in her Instagram Story, referring to a tasty doughnut. "also I had a child."

Luckily, she wasn't alone in her outfit repeating. She was joined by her TV daughter, Kiernan Shipka, who also threw on her 2011 Golden Globes outfit.

The 21-year-old actress was just 10 years old when she attended the Golden Globes in 2011. Both actresses were there to support their show, Mad Men, which was nominated in the Best Drama Series category.

"Hey January Jones, I heard we're putting on our Golden Globes looks from 10 years ago," Shipka captioned her response on Instagram. As the saying goes, "like mother, like TV daughter."