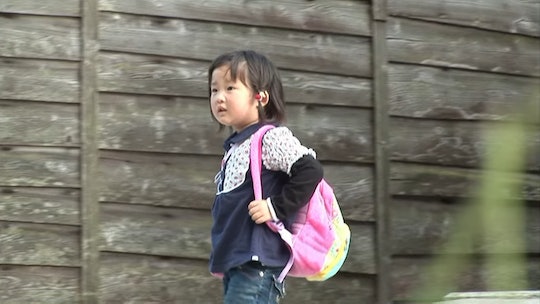 Old Enough Sends Toddlers To Run Errands On Their Own, But Is It For Real?

The long-running Japanese reality show follows children as young as 2 as they attempt a series of grown-up errand.

If you’ve headed over to Netflix recently, you may have noticed a new Japanese addition called Old Enough, an unscripted reality show in which children between the ages of 2 and 5 are given everyday errands to run for their families. Now, if you’ve watched an episode or two, you may wonder: wait... is Old Enough real? Here’s everything you need to know.

Each episode of Old Enough lasts between 5 to 15 minutes. One toddler may be asked to go to the store to get a list of items, another to mind her family’s restaurant, another to make orange juice. Some go with a sibling, but most are flying solo. As they attempt these tasks, an unseen comedian adds commentary and narration, alternately praising the child and gently roasting their less-than-sophisticated efforts. On camera, however, the children are left to their own devices — no one, at least no one from the Old Enough team, helps them buy the curry, leave an offering at the local shrine, or prepare a dish. They do it all on their own... or do they?

Romper did a little research, and even spoke to some moms living in Japan to find cultural insight and see what might get lost in translation.

Old Enough has been airing on Japanese TV for over 30 years.

Old Enough (or Hajimete no Otsukai, the show’s title in Japanese) first aired in Japan in 1990, where it is incredibly popular — it currently airs twice a year for three-hour specials and garners 20% of the Japanese viewing audience, The Guardian reports.

“Everybody loves it in Japan; that's why the show was running for [a] long time,” Yuuki, a mother living in Tokyo, tells Romper. “You can see children try so hard to be brave or don't give up.”

Though the visual language of the series may be a little unfamiliar or unusual for American audiences (lots of bubble font graphics popping up frequently) it doesn’t take long to get used to or impede the enjoyment one bit. Indeed the show has already proven internationally appealing, with adaptations in Italy, the UK, Vietnam, China, and Singapore.

The children are supervised by a hidden safety team.

The same thing that makes the show entertaining and utterly charming — little kids attempting to do grown-up things — can also be a bit harrowing at times. Like, “Why is that child crossing the street by themselves?!” or “You mean to tell me that toddler is a kilometer from home completely unsupervised?!”

Not exactly. TBI Vision reports that a hidden safety team — disguised as gardeners, passersby, fellow shoppers, and more — are all nearby to make sure the adorable helpers don’t get hurt and are never truly unattended (to say nothing of the camera operators tailing them), a fact that’s common knowledge to Japanese fans.

“Many TV staff members support children and protect children from danger,” Tokyo mom Noriko tells Romper. “And of course we know well about that. So we can enjoy watching.”

And it’s not just the Old Enough team involved. In all cases, the producers are quite thorough in coordinating with the children’s parents as well as parental organizations to choose an appropriate errand. It will always be a challenge, but the parents are involved to ensure it’s not too challenging.

Children doing errands like these are not as unusual in Japan as in the United States.

As you can imagine, toddlers running around getting groceries is hardly an accurate representation of Japanese childhood. (If it were it probably wouldn’t be all that entertaining in Japan, would it?)

While Yui recalls a shorter errand to get cabbage with her brother when they were 6 and 4 in Tokyo 38 years ago (they wound up getting lettuce by mistake), she doesn’t think that sort of thing would fly today. “It is impossible for children to walk alone in the city,” the Tokyo-based mom tells Romper. “Maybe it's OK in areas where they know each other well. If we do the same thing about our own children ... some people will worry about that and start to search children’s parents.”

But as for Ayaka, a mom of two in Tokyo, she happily let her 3-year-old and 6-year-old go out to get some vegetables before. “I think that's good experience for them,” she tells Romper. “I think it is OK in Japan.”

And yet even though most preschoolers may not be doing things independently yet, the moms we talked to let us know that starting in elementary school, Japanese schoolchildren are generally expected to take on a level of independence — public transportation to school, running errands — that would be quite unusual for most Americans the same age.

In many ways, Old Enough is a lot like The Great British Baking Show. It’s imported from overseas and utterly charming. Everyone on it is absolutely precious, there are comedian hosts, and it has the ability to get you intensely invested in simply, fairly low-stakes objectives without stressing you out. In short, Americans are here for it.

“I have tears in my eyes from chuckling at the first two episodes. It's called Old Enough, and it's a show about toddlers with better executive function than me,” @cocoadog tweeted.

“Excuse me please @netflix but you need to get one thousand more episodes of Olde Enough,” suggested @EmolumentsNow. “IT IS THE PUREST AND GREATEST THING I HAVE EVER SEEN.”