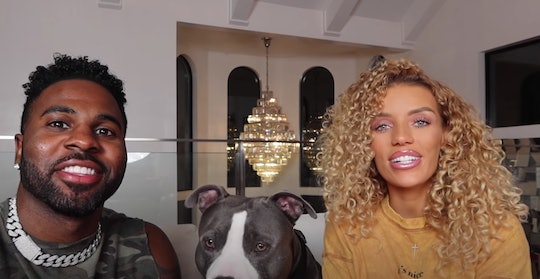 Jason Derulo Is Going To Be A Dad!

“Couldn’t be more excited for this new chapter in our life.”

Jason Derulo won’t be “Ridin’ Solo” for much longer. Over the weekend Jason Derulo announced he’s expecting his first child with his girlfriend, model Jena Frumes. “Couldn’t be more excited for this new chapter in our life,” the pop star and TikTok creator captioned a video of him and Frumes on Instragram, strolling on the beach together while he rubs and kisses her baby bump.

Derulo and Frumes — who have been dating since “just before the start of the pandemic,” according to People — are all over each other’s social media accounts. Derulo often makes appearances on Frumes’ YouTube channel while she is a frequent costar on his TikTok account. But now, these two are collaborating in a whole new way.

Frumes also shared a picture of her and Derulo on Instagram to announce the news. In it, the couple is standing on the beach with Derulo’s hands on her pregnancy bump. “Mom & Dad,” she captioned the stunning photo.

Though this will be his first child, Derulo has shown off his parenting skills on TikTok with his 4-year-old niece, Skylar. In fact, the pop star has been open about wanting to be a dad. In a 2016 interview with Yahoo! News, the singer admitted that he “definitely wants kids.”

“I used to think I want seven kids or something like [that],” he told Yahoo! News. “But after my little nieces and nephews, that seems like a lot. I think I’m cool with two, yeah, two is good.”

This past summer, Derulo also admitted to Page Six that he was “getting to that age” to start thinking about having kids. But it seems like those thoughts came to fruition now that Derulo and Frumes have a little one on the way. Be sure to bookmark his TikTok for plenty of proud dad videos. Congrats!

More Like This
Chrissy Teigen Reveals She’s Pregnant, Expecting Again With Husband John Legend
Cool Mom Kate Middleton Chatted With A Boy On A Train. He Didn’t Know Who She Was.
The Home Edit's Clea & Joanna Reveal The Grossest Things Their Kids Have Left In The Car
Andy Cohen Dressed His Daughter Lucy The Cutest Fruit & Veggie Dress