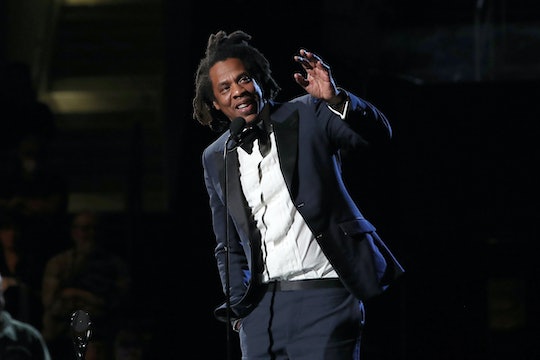 “You’ve got to have ultimate confidence — like you do.”

An 11-year-old reporter from Brooklyn’s Bushwick neighborhood stopped JAY-Z on the street for an interview that has quickly gone viral. Jazlyn a.k.a. Jazzy, the young reporter behind YouTube and Instagram channels known as Jazzy’s World TV, asked rapper and record executive JAY-Z, whose real name is Shawn Carter, if he could share with kids the secret to his success — and boy, did he deliver some golden advice.

“Believe in yourself, even before anyone else believes in you,” the rapper told Jazzy when she asked him what he’d tell kids who dream of being as successful as him. “You’ve got to have ultimate confidence — like you do. You’re very confident. And just believe in yourself.”

JAY-Z is certainly not someone who’s short on self-confidence. In fact, the rapper, who released two new tracks in October — “Guns Go Bang,” which features Kid Cudi, and “King Kong Riddim,” which features Jadakiss, Conway the Machine, and BackRoad Gee — may be one of the very best examples of self-assuredness judging from his lyrics alone. And he’s right: Jazzy is also very confident.

The 11-year-old has been interviewing celebrities, athletes, and other public figures for her own YouTube channel since she was 9 years old. Over the course of the last two years, Jazzy has interviewed Dwyane Wade, Steve Harvey, 50 Cent, Alexandria Ocasio Cortez, Nas, Fat Joe, and more, asking them everything from “What games did you play as a kid” to “What was your favorite cartoon as a kid?”

Like her interview with JAY-Z, many of Jazzy’s interviews see the young reporter prompting celebrities to share a few words of wisdom for kids like herself (and let’s face it, for adults too). In a recent interview with Nas, for example, Jazzy asked the rapper what the toughest obstacles he faced while growing up in Queensbridge were and what motivated him to succeed.

“Growing up there were a lot of distractions from education,” Nas told Jazzy, adding he eventually realized that education was the number one thing he needed to try to focus on. “Because I had a lot of friends and there were a lot of parties and a lot of hanging out and being a mischievous kid kind of took me away from school for a while but now I know, education is the most important thing.”

Jazzy shared her exchange with JAY-Z on Instagram on Wednesday, teasing that part two of her interview would drop Friday.

More Like This
Freeze! The Single From The New 'Bluey' Album Just Dropped
Blue Ivy Joined Her Mom Beyoncé On Stage To Perform “Brown Skin Girl”
The Best Valentine’s Day TV Episodes For Kids
Sally Field Is The Ultimate Cool Mom Who Once Tried To Set Her Son Up With An Olympian
What Parents Are Talking About — Delivered Straight To Your Inbox