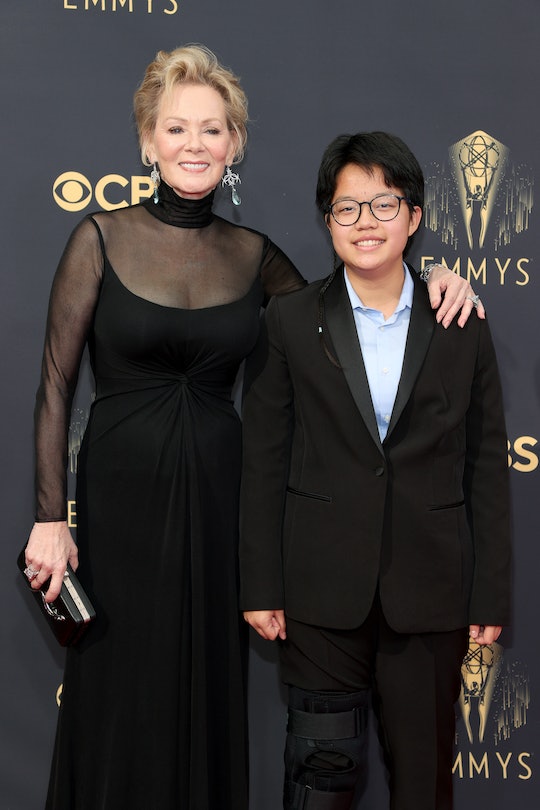 Jean Smart Has An Iconic Career & A Loving Family

The Hacks star and 2022 Emmy nominee is a single mom of two sons with a big age gap.

In a career spanning more than four decades, actress Jean Smart is an icon. She began acting in the mid-1970s with a series of theatrical productions, but soon transitioned to television where she first rose to prominence as Charlene Frazier Stillfield on the comedy sitcom Designing Women in 1985. Since then, she has earned critical acclaim in a variety of serious and comedic roles, earning her 12 Emmy nominations and four wins, including for her role as Deborah Vance on HBO’s Hacks. Somehow, in all this, Smart also married Richard Gilliland and had two sons. Here’s what we know about the various men in her life...

Smart first met the man who would later become her husband in 1986 while filming Designing Women, according to Entertainment Weekly. At the time, Gilliland was cast to play J.D. Shackelford, the boyfriend of Annie Potts' character Mary Jo Shively, leaving Smart to once joke she met her husband “when he was kissing someone else.”

Although Gilliland appeared in more than a dozen Designing Women episodes from 1986 to 1991, it didn’t take long for sparks to fly between them. The pair were reportedly married in an intimate ceremony in fellow Designing Women cast member Dixie Carter's garden in 1987, according to USA Today.

Gilliland died rather unexpectedly from a heart condition on March 18 at the age of 71. He and Smart had been married for 34 years. In an interview with The New Yorker, Smart remembered her husband as an unfailing source of support. “He really sacrificed his career for me to be able to take advantage of my opportunities,” she said. “I wouldn’t have all this, if it wasn’t for him.”

Smart said his death caught her off guard. “It’s not anything I ever dreamed would happen,” she said. “Not so soon. He made me laugh all the time. That’s going to be hard to live without.”

Smart and Gilliland had their first child shortly after getting married.

Smart and Gilliland welcomed a son they named Connor in 1989. However, not much is known about Connor, who is now in his early 30s, as he has lived most of his life outside the public eye and off social media.

Smart welcomed her second child in 2009.

Smart was accompanied to the 2021 Emmys by her youngest child, Forrest, who was “ecstatic” about her Emmys win for Outstanding Lead Actress in a Comedy Series. “I was thrilled to share it with my youngest, and he’s ecstatic!” Smart told Entertainment Tonight. “So that was really special.”

In May 2009, Smart and Gilliland welcomed their second child together via adoption. According to The Sun, Smart and Gilliland had hoped to adopt from China in 2004, when Connor would have still been a teen, but the adoption process ultimately took significantly longer than the couple expected. “It actually took a lot longer than we expected,” The Sun reported Smart said when the adoption was finalized after five years. “We thought my son was going to be about 15 when we got the baby and he’s just turned 20.”

In the end, however, the delay didn’t bother Smart. “We wouldn't have gotten the same baby if we had gotten a baby right away,” Smart told Today.

But while Connor seemingly steers clear of social media, Forrest keeps up with all the latest social media trends — or at least the ones that involve his mom. In 2021, Smart told Today her preteen had let her know she was going viral and urged her to get on social media. “I don't do social media, so my 12-year-old has insisted that I open a Twitter account," she said, laughing. “I'm not so sure I’m going to do that.”