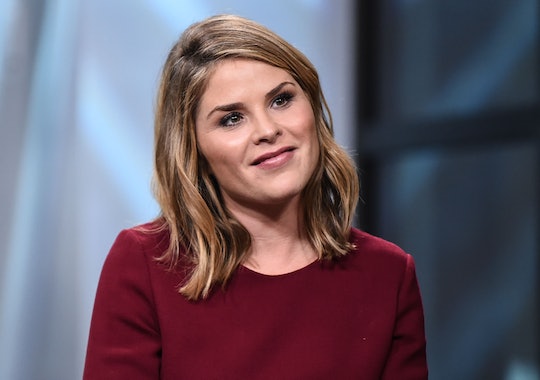 The former first daughter reflected on what it was like to welcome new kids into the White House.

As the world waits to see if President Donald Trump will adhere to federal law and centuries-worth of tradition by completing a peaceful transition of power, one former first daughter has reflected on the role she once played in helping a new family settle into the White House. On Tuesday, Jenna Bush Hager recalled showing Malia and Sasha Obama around the White House while sharing a few old photos on Instagram.

"Twelve years ago today — I drove from my job teaching in Baltimore to meet my mom and sister in DC to show the next residents of this house their new home," Hager recounted on her Instagram. "Barbara and I taught the girls how to slide down the banister and all the secrets of the White House we loved as little girls — the best hiding spots, the movie theatre, and bowling alley. We showed them our rooms that would soon be theirs."

In the first photo Hager shared, the former first daughter can be seen checking out the view from a White House balcony with Malia and Sasha, who appears to be waving. The next two photos show Hager and her twin sister Barbara Pierce Bush coaching Malia and Sasha on how to use a banister within the White House to slide down a graded hallway as their mother, former First Lady Laura Bush, looks on.

All of the photos Hager shared Tuesday date back to 2008 when Barack Obama defeated Republican presidential nominee John McCain to become the nation's 44th president. Obama's victory meant he would succeed Hager's father, then-President George W. Bush, and take over not only the Oval Office but the White House's Executive Residence as well. At the time, Malia was 10 years old and Sasha was 7, making the Obama daughters the youngest first children to move into the White House since the Kennedys had occupied it in 1961. In comparison, Hager and her twin sister were 19 when their father first became president in 2001 and 7 when their grandfather, George H. W. Bush, was sworn in as the 41st president in 1989.

In an Instagram post published Tuesday, former first daughter Jenna Bush Hager shared a series of old photographs while recalling her memories of showing Malia and Sasha Obama around the White House in 2008.

But Hager and her sister didn't just show Malia and Sasha around the White House, they also reportedly wrote a letter to the girls full of support, encouragement, and advice on how to preserve the best parts of childhood while living in the White House. "Although it's an honor and full of so many extraordinary opportunities, it isn't always easy being a member of the club you are about to join. Our dad, like yours, is a man of great integrity and love; a man who always put us first," the girls wrote, adding that they will likely observe many people attempt to characterize and define their father. "So here is our most important piece of advice: remember who your dad really is."

Eight years later, the Bush daughters wrote another letter to Malia and Sasha, this time welcoming them into a different sort of club, the club for former first children. "You won't have the weight of the world on your young shoulders anymore. Explore your passions. Learn who you are. Make mistakes — you are allowed to," the Bush daughters wrote. "You have lived through the unbelievable pressure of the White House. You have listened to harsh criticism of your parents by people who had never even met them. You stood by as your precious parents were reduced to headlines. Your parents, who put you first and who not only showed you but gave you the world. As always, they will be rooting for you as you begin your next chapter. And so will we."

In 2018, former First Lady Michelle Obama credited the Bush twins for being a steadfast source of support for Malia and Sasha. "They have managed this situation with poise and grace and they are normal and kind and smart and friendly and open," Obama told Good Morning America in 2018. "But I will also say that they had support from a lot of the other former first kids — Jenna and Barbara and Chelsea [Clinton]. I love those girls. I will love them forever for what kind of support they provided to my daughters throughout. They always had their back — somebody went after them in the press, Jenna would get in there and say something, Chelsea would send a tweet out and that made a big, big difference."