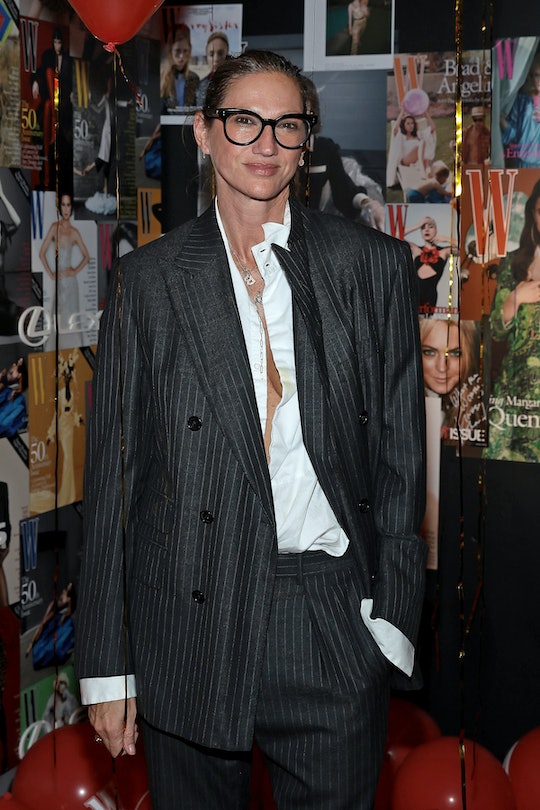 The fashion designer and entrepreneur is already one of the Big Apple’s most stylish moms.

Jenna Lyons is a famed style icon, former J. Crew fashion designer, taste maker, and single mom, but you probably wouldn’t think to call her a housewife. Indeed, the chic Manhattanite was recently cast on the rebooted Bravo guilty pleasure The Real Housewives of New York City (known adoringly to reality TV fans by the abbreviated: RHONY). Now the CEO of LoveSeen, a line of fake eyelashes, Lyons is set to document her big life in the Big Apple and open herself up to a whole new set of fans.

She’s no stranger to your TV screen.

With stints in both scripted and reality TV, Lyons was a guest star on Lena Dunham’s HBO show Girls. She lends her name to Stylish with Jenna Lyons, where the entrepreneur and working mom gives a behind the scenes look at starting a business. But her most high-profile (and likely high-drama) gig to date is definitely the recent announcement that she’s joining the cast of Real Housewives Of New York City. Bravo made the big reveal at this year’s BravoCon and posted a photo of the intriguing new Season 14 cast flanked by Andy Cohen on their Instagram grid.

“Introducing…THE NEW CAST OF #RHONY SEASON 14! 🍎,” BravoTV captioned the post along with a list of all of the show’s newbies.

Lyons is a single mom to her son, Beckett.

In a funny Instagram post celebrating her only child, Lyons thanked one very surprising person in her life — the doctor who administered her epidural!

“15 years ago today I met the most important person in my life. My anesthesiologist. Beckett Lyons Mazeau arrived at 2:30pm on October 3rd. I couldn’t love you more - never not ever not ever not loving you. I am so incredibly proud of you. Thank you for letting me be your mama - it’s the worst paid best job ever. I LOVE YOU. HAPPY BIRTHDAY B!!!,” she captioned the post along with an avalanche of red hearts.

With a high-profile parent sometimes comes some unwanted media attention. As a little kid, Lyons’ son was once pictured with his famous mom in an ad for J. Crew that garnered national media coverage and caused an uproar over some pretty innocent pink nail polish. Beckett, now a teenager, is reportedly quite the brain and the “the de facto ‘head of technology’ at Lyons’ enterprise.”

Soon after her divorce, she was infamously outed at the age of 43.

One of the downsides of fame is surely how the media cuts down people they put once put on a pedestal, and Lyons knows this painful reality too well. Dubbed by the New York Times as “the woman who dresses America,” the designer was also infamously outed by the NY Post at the age of 43. Once married to artist Vincent Mazeau, who is also Beckett’s father, the couple called it quits after nine years of marriage. Lyons then sparked up a much-discussed romance with then-girlfriend Courtney Crangi, but they too split up in 2017.

Since Lyons’ love life is only one of many intriguing things about her, it will be exciting to see more of this working mom on the small screen. Among many revelations, let’s hope she opens up about where she gets all those fabulous glasses.