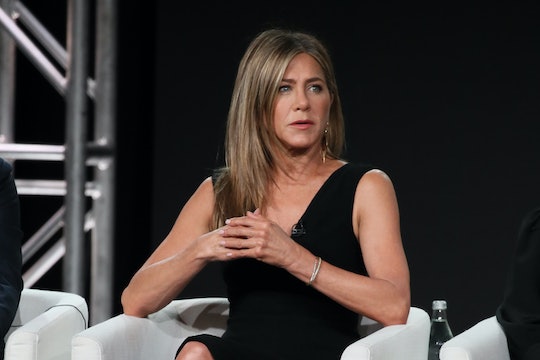 “You have no clue what’s going [on] with me personally, medically, why I can’t... can I have kids?” The Morning Show actress said.

Despite her silence at the time, Jennifer Aniston has revealed she used to take tabloid pregnancy speculation and rumors that she prioritized acting over becoming a mother very personally. In a very candid interview with The Hollywood Reporter, Aniston said constant speculation about whether or not she was pregnant or even planning to ever have kids struck her as “hurtful” and “nasty.”

“I used to take it all very personally — the pregnancy rumors and the whole, ‘Oh, she chose career over kids’ assumption,” The Morning Show actress told The Hollywood Reporter. “It’s like, ‘You have no clue what’s going [on] with me personally, medically, why I can’t... can I have kids?’ They don’t know anything and it was really hurtful and just nasty.”

While headlines claiming Aniston is pregnant have existed since the late ‘90s, the 52-year-old admitted she no longer attempts to keep up with them.

“I haven’t seen a tabloid in so long,” she told the magazine. “Am I still having twins? Am I going to be the miracle mother at 52?” (For the record, tabloids and celebrity gossip blogs such as that run by Perez Hilton have most recently reported speculation that Aniston has adopted a child.)

And although tabloids have experienced a surge of criticism in recent years for their constant reporting of unproven or unsubstantiated rumors, Aniston told The Hollywood Reporter she felt average citizens were now just as bad thanks to social media. “I think people are still doing it today,” Aniston said, referencing the endless speculation and scrutiny of celebrities’ private lives. “What the tabloids and the media did to people’s personal lives back then, regular people are doing now.”

“It’s almost like the media handed over the sword to any Joe Schmo sitting behind a computer screen to be a troll or whatever they call them and bully people in comment sections,” she continued. “So it’s just sort of changed hands in a way. And I don’t know why there’s such a cruel streak in society. I often wonder what they get off on.”

Over the years, Aniston has attempted to push back on the media’s continued speculation about her relationships and reproductive choices. In 2016, she went so far as to directly address rampant pregnancy rumors with an op-ed in the Huffington Post. “For the record, I am not pregnant,” the actress wrote. “What I am is fed up. I’m fed up with the sport-like scrutiny and body shaming that occurs daily under the guise of ‘journalism,’ the ‘First Amendment’ and ‘celebrity news.’”

Aniston went on to argue that the way media outlets reported on her was “a reflection” of how society as a whole sees women. “The objectification and scrutiny we put women through is absurd and disturbing,” she said. “The sheer amount of resources being spent right now by press trying to simply uncover whether or not I am pregnant (for the bajillionth time... but who’s counting) points to the perpetuation of this notion that women are somehow incomplete, unsuccessful, or unhappy if they’re not married with children.”

While speaking to The Hollywood Reporter, Aniston credited the support of “so many evolved, positive people” with helping her weather the constant scrutiny and speculation of her body and her personal life.