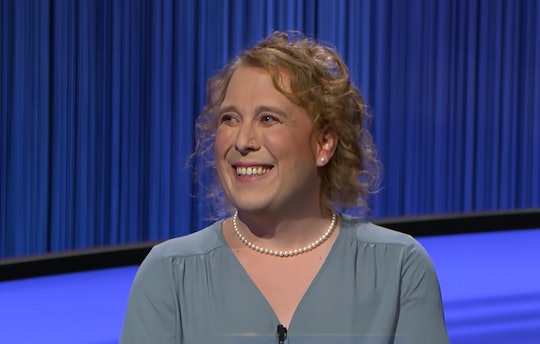 “I’m so grateful that I’m giving some nerdy little trans kid somewhere the realization that this is something that they could do too.”

After making history as the first openly transgender Jeopardy! contestant to qualify for the game show’s “Tournament of Champions,” Amy Schneider is hoping to inspire other “nerdy” transgender children. As a longtime Jeopardy! fan, Schneider said she was ultimately inspired to try out for the show after seeing other trans contestants compete. She’s now looking to pay it forward by being a source of inspiration for any trans children that might be watching and dreaming of one day standing behind a Jeopardy! contestant podium.

“I am from Ohio where the only trans people I thought of were drag queens or prostitutes,” Schneider said in an interview with the San Francisco-based ABC affiliate KGO-TV. “Seeing other trans women in a good spotlight inspired me to not be afraid of trying to compete in the thing I have always loved.”

And while Schneider, who has already won more than $380,000 in prize money, is looking to win it all in the “Tournament of Champions” next year, she’s also hoping to increase positive trans visibility. “Seeing trans people anywhere in society that you haven’t seen them before is so valuable for the kids right now that are seeing it,” she said. “I’m so grateful that I am giving some nerdy little trans kid somewhere the realization that this is something that they could do too.”

Schneider acknowledged the trans contestants who came before her on Twitter just before the first episode she appeared in aired. “FYI, I am not the first out trans person to appear on Jeopardy,” Schneider tweeted on Nov. 17. “There have been a handful before, including one, Kate Freeman, who was the first out trans champion on 12/16/20. My thanks to all of them for blazing the trail!”

While not the first transgender contestant to ever compete on Jeopardy!, Schneider became the first to qualify for “Tournament of Champions” when she won her fifth consecutive game last week. Since hitting her 5-day win last week, the engineering manager has doubled her winning streak, putting her third in a ranked list of the 2021 Jeopardy! Tournament of Champions contestants. Leading the list is Matt Amodio with 38 game wins, followed by Jonathan Fisher with 11.

Schneider, who now lives in Oakland, California, will compete against Amodio, Fisher, and this year’s other top Jeopardy! contestants in the game show’s annual elite contest scheduled to be held next year.

“I'm not going to pretend I didn't think I could do good,” the 10-day Jeopardy! champ told KGO-TV. “But this is just so much better than I thought I would do.”