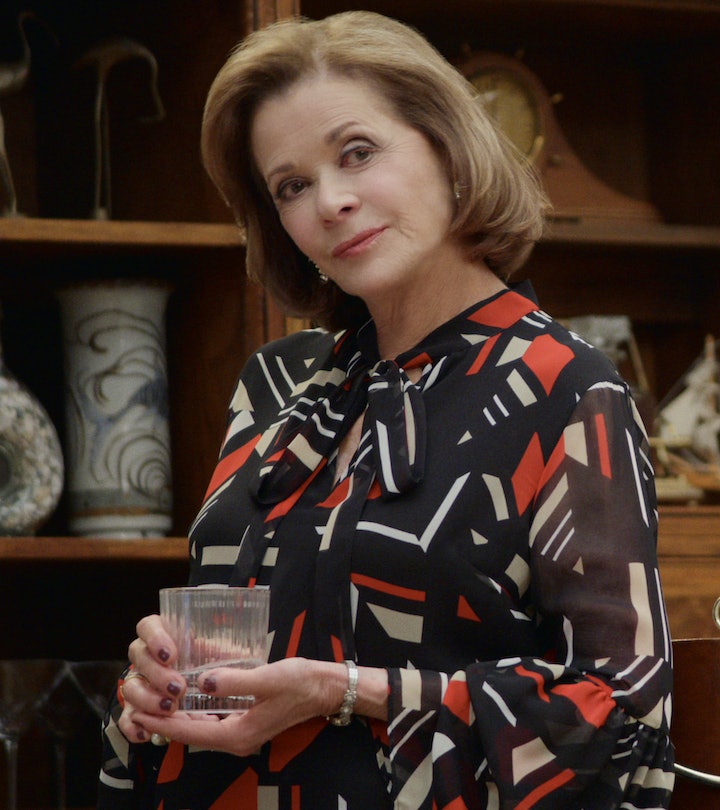 Jessica Walter As Lucille Bluth Was Our Bad Mom Alter-Ego

Walter’s iconic character gave moms an outlet for all the things we aren't supposed to be.

Some celebrity losses hit harder than others and, for me, Jessica Walter’s death is definitely one of them. Since the news broke on Thursday, social media tributes from fans and colleagues have hailed the 80-year-old actress as kind, hilarious, professional, brilliant, and talented. Certainly, she had plenty of opportunities to gather many, many fans, colleagues, and accolades over the course of her career, and she’s been making me laugh since I was a kid watching Dinosaurs on TGIF (she voiced the mom, Fran, which you’ll hear it right away if you didn’t know that before). But while I’ve loved so many of her performances (special shout out to her voice work on FX’s Archer), it’s her best-known role on Arrested Development that really means something to me.

Lucille Bluth is the sharp-tongued matriarch of a dysfunctional, wealthy family. She’s rarely seen with hair out of place or without a martini in hand. She’s everything moms aren’t supposed to be: unfeeling, cruel, and domineering. No one is spared her ruthless witticisms, and her sharpest barbs seem to be reserved for her children. From gleefully criticizing Lindsay’s appearance, to constantly lying to Michael, emotionally stunting Buster on purpose and... just not really caring for Gob.

“I’m nothing like Lucille,” Walter told Entertainment Weekly in 2005. “Nothing. My daughter will tell you. I’m really a very nice, boring person.” And I really do think that’s part of the secret sauce that made her so tremendously perfect in the role. Someone who was actually like Lucille couldn’t successfully play Lucille. You need to know what it is to be a good mom in order to be able to flip that idea on its head and portray such an awful one.

And seeing such a terrible mom? It’s fun. Not just fun but kind of validating, honestly: to a see a mother on TV whose character can’t be summed up by saying “She’s the mom.” Like, yes, she’s a mom, but she’s just as selfish as she wants to be, just as indulgent as she wants to be (“Get me a vodka rocks.” “Mom, it’s breakfast!” “And a piece of toast.”), just as sarcastic, and biting, and extra, and uninhibited, and herself as she wants to be, no matter what it means to anyone else in her orbit.

Mrs. Bluth also has a super-power few of us can imagine: generally speaking, she doesn’t care.

Imagine being able to turn off that constant concern and consideration that comes along with being a parent. Are the kids OK? Does everyone have everything they need? What needs to be done for whom? I can’t, and I couldn’t even if I wanted to – it’s always there. The other night I had a dream in which I went on a vacation to the Caribbean, which quickly became a nightmare because I realized I didn’t know who was watching my kids. I spent the rest of this reverie looking up flights on my phone because I’m worried about them in my dreams. And what’s more, I know this fact surprises 0.00% of you, because you’re the exact same way.

But Lucille — our Bad Mom id, our not-really-but-kind-of-alter-ego — would never. She’d be like “They’re probably fine. I gave them some money to go see a Star War. Have another drink.”

Just as there’s always money in the banana stand, I think there is (and should be) a little bit of Lucille inside every Good Mom. While it’s very important, for ethical and probably legal reasons, not to listen to our inner Lucille most of the time, every now and then it’s equally important to get in touch with her, maybe even meet her at the hospital bar for a drink or two. And while you’re there, go ahead raise a glass and toast the only woman who ever play her: the incomparable Jessica Walter, who made us realize that being a Bad Mom can sometimes be good thing.