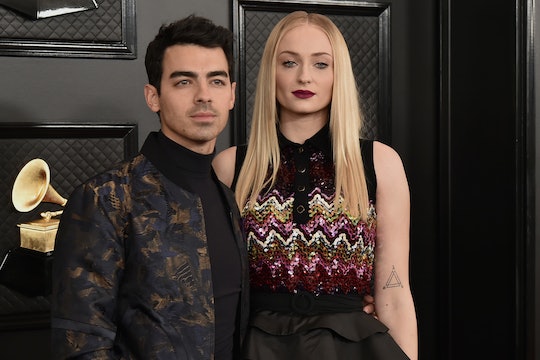 To celebrate his first Father’s Day since officially becoming a dad in 2020, Joe Jonas stepped into full dad-mode with sandals, denim shorts, a baseball hat, and grilling accessories. The Jonas Brothers singer was hailed “the ultimate dad” by wife Sophie Turner, who shared a photograph of her husband decked out in his Father’s Day best.

“Happy Father’s Day to the ultimate dad and all the dads out there,” Turner wrote when sharing a photo of Jonas posing before a Happy Father’s Day balloon banner on Instagram. “Grab that cooler, pick up your spatula, strap on those sandals and get to grillin’. Joe, you are the best baby daddy. It’s my greatest joy to watch.”

In the photo, Jonas wears a pair of brown sandals with denim shorts and a short-sleeved button-up shirt made to resemble the American flag. An American flag fanny pack, blue baseball hat, and dark sunglasses complete the singer’s holiday ensemble. But what really brought Jonas’ outfit to the next level was the dad-swag he’d received this Father’s Day: a grilling spatula, a cooler of beer, and a pair of New Balance sneakers.

Jonas and Turner first wed in a surprise Las Vegas ceremony after the 2019 Billboard Music Awards. The couple then held a more formal wedding in France in late June, nearly two months after their U.S. ceremony. According to People, the back-to-back ceremonies were the couple’s way of having the romantic French wedding of their dreams while still ensuring their marriage was legal and recognized in the United States.

In early 2020, sources close to the couple told tabloids the Game of Thrones star was pregnant. While neither Turner nor Jonas commented publicly to confirm or deny the news, the pair did take a very public walk around their neighborhood in May 2020, during which Turner showed off her growing baby bump.

A few months later, a publicist for the couple confirmed to Us Weekly they had welcomed a child but did not reveal the baby’s name or gender. TMZ later reported Turner and Jonas had welcomed a daughter whom they named Willa.

In an interview with CBS This Morning last month, Jonas described his now nearly 11-month old daughter as “gorgeous” and said he was grateful to have been given the opportunity to spend the first year of her life at home as a family.