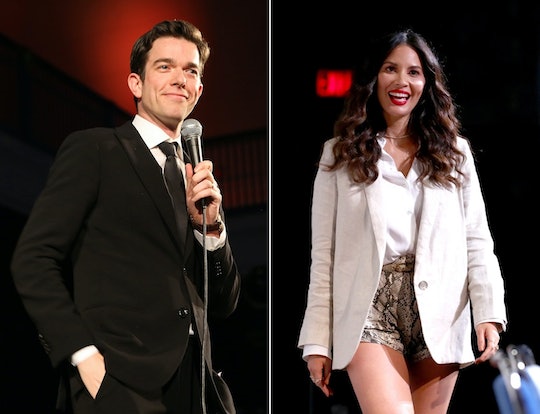 The duo is rumored to have begun dating in May after the comedian announced he was separating from his wife.

In the last 12 months, John Mulaney has had more than his share of ups and downs. While recapping his whirlwind of a year — which included a divorce, time in rehab, and a new relationship — on Late Night With Seth Meyers, the comedian revealed he and Olivia Munn are expecting their first child together.

“I got into this relationship that has been really beautiful and with someone incredible,” Mulaney said of Munn, who he began dating in the spring. “She’s kind of held my hand through that hell [of early recovery] and we are having a baby together...I’m going to be a dad.”

Mulaney went on to say that both he and Munn were “really, really happy” and credited the X-Men: Apocalypse actress with helping him navigate the early days of his recovery.

“She got to date me right out of recovery, which is what they call a reverse catch. It is a very, very lucky thing to have met this woman,” Mulaney said. “Olivia and this baby have helped save me from myself and this early journey out of recovery.”

As a close friend of Mulaney, Meyers helped stage an intervention that ultimately convinced the comedian and former Saturday Night Live writer to seek treatment for drug and alcohol addiction after he relapsed sometime in the fall. Mulaney began a 60-day in-patient program at a rehab facility in December, according to People.

“You guys saved me from drugs,” Mulaney told Meyers in a moment of serious reflection. “I don’t have a joke for that. I’m really grateful to you, buddy.”

But that apparently wasn’t Mulaney’s first attempt at sobriety. While talking with Meyers, Mulaney revealed he’d checked himself into rehab a few months before his relapse. “I went to rehab in September,” Mulaney said while recapping his last year on Late Night With Seth Meyers. “I got out in October, I move out of my home from my ex-wife, I host Saturday Night Live on Halloween, I relapse on drugs after the show.”

Mulaney’s decision to separate from his now ex-wife Anna Marie Tendler did not become public until May, roughly around the same time that tabloids began reporting on his relationship with Munn.

“In the spring, I went to Los Angeles and met and started to date a wonderful woman named Olivia,” Mulaney told Meyers. “I met her actually for the first time in life at your wedding to Alexi, your wife. So it's nice something good came out of the wedding... It is a very, very lucky thing to have met this woman.”

While Mulaney is clearly over the moon at becoming a dad, Munn has not yet commented on her pregnancy.