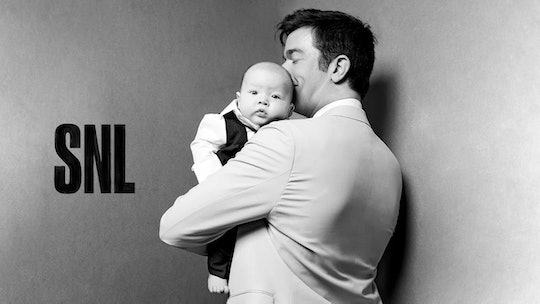 Comedian John Mulaney joined the storied ranks of Saturday Night Live history over the weekend as he hosted his fifth show, joining the elite ranks of the “Five Timers Club.” But we were most excited about his opening monologue in which he gave us a hilarious peek into life as a dad to 12-week old Malcolm, who he shares with actress Olivia Munn.

It seems that in addition to joining the Five Timers Club, Mulaney also joined the very large club of parents who have to stop themselves from devouring their children. “His legs are like little calzones and I wanna eat ‘em,” he joked during his monologue. He went on to describe the infant as “a very cool guy for someone who can’t vote,” whom he bonded with very shortly after birth, when he was put under a warming light in the delivery room.

“Light is just shining in his eyes, it’s really bright. He’s not crying or anything, he just looks up at the light and this is what he does,” said Mulaney, making a scrunched up, irritated face before shielding his eyes with his forearm. “He was annoyed but he didn’t say anything, and I’m like ‘That’s my son: a polite man in an uncomfortable situation but he’s not going to make a fuss.’”

Mulaney also talked about the whirlwind of a year he’s had in regard to being confronted with, and getting treatment for, his drug addiction. From humorously describing the intervention his friends held for him (“I knew right away it was an intervention. Do you know how bad of a drug problem you have to have if when you open a door and see people gathered your first thought is ‘This is probably an intervention for my drug problem?’”) to “breaking up” with his drug dealer in rehab (who, it would seem, wasn’t actually a drug dealer but a concerned painter).

He also mused on the recent recall of his son’s favorite pacifier, saying “He loved it. We have a dozen of them in a basket on our counter, and I see this look in his eyes all the time like ‘Ah! I really want to use those, but I can’t because they could kill me.’ Welcome to my world, homey.”

Malcolm is Mulaney and Munn’s first child. Speaking on Late Night With Seth Meyers (an IRL friend of Mulaney’s) back in September, Mulaney described his still new relationship and impending fatherhood with gratitude and good humor. “[Munn] got to date me right out of recovery, which is what they call a reverse catch. It is a very, very lucky thing to have met this woman,” Mulaney said. “Olivia and this baby have helped save me from myself and this early journey out of recovery.”