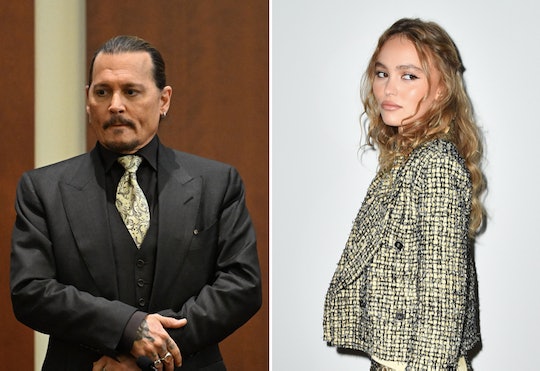 Lily-Rose Depp is, as most people probably know, the daughter of actor Johnny Depp and singer Vanessa Paradis. She is also an actress, who has been appearing in films since she was 14, and a model, who has been a Chanel ambassador since she was 15. And while, certainly, famous parents were fundamental to her career, it’s fair to assume that a 22-year-old woman with a career of her own wouldn’t appreciate being seen solely through the lens of being her father’s daughter. Unfortunately, it would seem, some people didn’t get the memo: the actor’s fans have been harassing his daughter in the comments of her Instagram account as his defamation case against his ex-wife Amber Heard continues to capture public interest.

Lily-Rose isn’t a frequent Instagrammer, at least not on her official account. Her latest post, as of press time, is from April 9, just a few days before the Johnny Depp/Amber Heard defamation trial began. The Pirates of Caribbean actor is suing Heard for $50 million over a 2018 op-ed she wrote for The Washington Post about her history with domestic abuse and did mention Depp’s name. Depp denies ever getting violent with Heard and she is countersuing for $100 million. Depp and Heard were married for 15 months, divorcing in 2016.

Since the trial began, Lily-Rose’s most recent Instagram post — a short film she made for Chanel — has been inundated with Johnny Depp fans chiming in with comments like “#JusticeForJohnny” or varying, numerous versions of “We love your father!”

While these comments are and have been visible on Lily-Rose’s Instagram account, Twitter user @thisisnotahmad shed light on the bizarre behavior by tweeting out screenshots of some of the most emphatic and aggressive examples.

Others run from passive aggressive (“I see not one picture of your father. Why?”) to accusatory (“Not a single pic of your dad! What kind of human being are u?!”) to the misogynistic (“You post your t*ts more than you’re [sic] own dad, what a wreck.”).

Other comments, not shared in the @thisisnotahmad tweet, are practically formal letters. One comment urges her to “please think about” testifying on her father’s behalf, referring to Lily-Rose as “my dear” before going into details and speculations about the strategies being used by Heard’s legal team.

In another tweet from @thisisnotahmad, a screenshot from Twitter user @bliu911, who has tweeted repeated in Johnny’s defense.

“There is no doubt in my mind whatsoever that these are psychotic @realamberheard fans, pretending to be supporters of #JohnnyDepp and harassing his daughter Lily Rose in a sad attempt to make Depp supporters look bad,” they tweeted, without apparent evidence, concluding, “#GoodtryScamber.”

Most of the comments, however, are an attempt to show support toward Johnny Depp, despite the fact that the post they’re responding to has nothing to do with Johnny, the case, or his relationship with his daughter. They are not strictly speaking unkind (at least not to any of the Depps), but are nevertheless out of place and entirely unsolicited. “God bless your father. I hope he knows he is always loved by his fans and we have never stopped believing in him,” reads one. When another commenter suggests the first “Go comment on JD [presumably Johnny Depp] fan pages,” the first replies simply, “Baby I’m sure she appreciates the support as well.”

Lily-Rose Depp has not engaged in these comments and has not spoken publicly on her father’s defamation trial since it began in April.