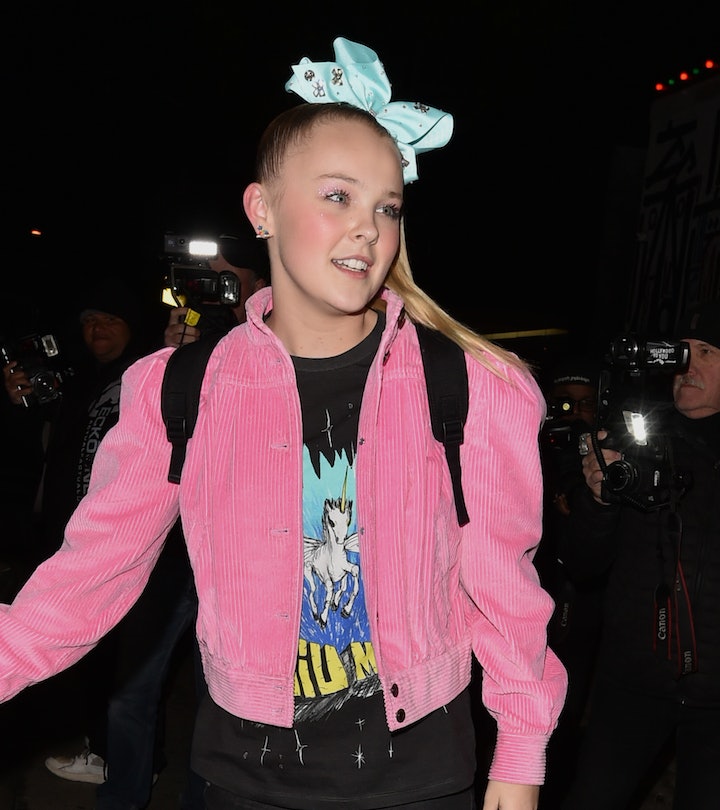 "This will mean so much to so many, JoJo."

Since coming out as a member of the LGBTQ+ community, JoJo Siwa has been flooded with kind notes from fans and fellow entertainers. Parents have also reacted to Siwa's coming out with sweet messages of support, showering the 17-year-old singer, dancer, and YouTube personality with praise and thanks for sharing her authentic self with her young fans.

Siwa came out over the weekend in a post shared across her social media channels. "My cousin got me a new shirt," the kids' entertainer captioned a photograph of her wearing a shirt that read, "Best.Gay.Cousin.Ever." In an Instagram Live conducted later that same day, Siwa told fans she had "never, ever, ever been this happy before. "

Many of Siwa's fans and friends were quick to pick up on how happy the singer appeared to be when sharing this side of herself. "I've known you a long time and this is the happiest I've ever seen you," fellow YouTube personality and comedian Colleen Ballinger, who welcomed a son in 2018, tweeted to Siwa. "You're absolutely glowing and I'm so proud of the woman you are becoming!"

But it wasn't just the singer's family, friends, and die-hard fans who celebrated her coming out. Parents of children who count themselves among Siwa's fans also sent the singer messages of support. "I'm a mom of a 7 [year old] little girl who has loved your music, videos, & merch since she was 4," one parent commented on Twitter. "We love you & support you! This does not bother me as a mother one bit ... Your music teaches kids to be themselves no matter who that self is!"

Other parents praised the entertainer for embracing her "full self" and encouraging those who look up to her to do so too. "My kids (9 and 6) love you. We wish you the absolute best in being your full self," another parent tweeted in response to Siwa's announcement. "And listen, if you are part of the magic of our LGBTQIA+ community, YOU HIT [the] LOTTO. It is the BEST. You get to love who you are and you get to encourage others to love themselves too."

Even parents of children who'd aged out of Siwa's target demographic cheered on the young entertainer. "My daughter is past her JoJo stage but I'll be encouraging her back to it now," one parent wrote to the singer on Twitter. "This is so amazing for young girls and boys to have a super popular young queer icon. This will mean so much to so many, JoJo."

Of course, parents weren't the only ones to reach out to Siwa following the singer's recent announcement. Abby Lee Miller, Siwa's former Dance Moms instructor, shared a heartfelt message to her student on Instagram.

"I always knew the world would be a more colorful, positive, sparkly place with a kind, loving, dazzling triple threat like you in it," Miller said, adding Siwa was "a shining example for the kids out there to live their BEST lives each and every day."