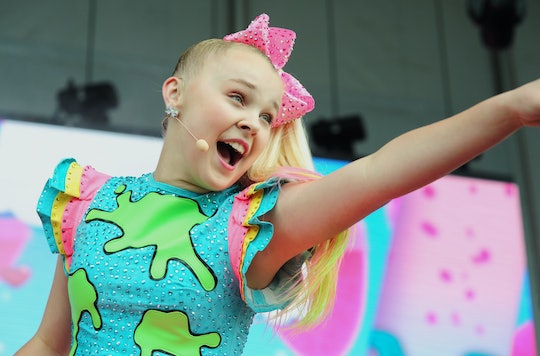 Parents Have Raised Concerns About A JoJo Siwa Game

The singer says she wasn't fully aware of the game's content.

The contents of JoJo's Juice, a game marketed to kids using the name and likeness of Nickelodeon star and tween influencer JoJo Siwa, has sparked serious concern among parents who claim it poses inappropriate questions. The outcry has led Nickelodeon and JoJo Siwa to pull the controversial game from stores and issue an apology, noting the 17-year-old singer wasn't aware of the game's full contents.

"It has been brought to my attention by my fans and followers on TikTok that my name and my image have been used to promote this board game that has some really inappropriate content," Siwa said in a recent video message shared on her Instagram account. "When companies make these games, they don’t run every aspect by me and so I had no idea of the types of questions that were on these playing cards. Now, when I first saw this, I was really really really upset at how gross these questions were."

The questionable contents of JoJo's Juice, which is marketed for kids age 6 and older, were first brought to national attention late last week by Heather Watson, a mom who shared some of the questions posed by the game in a TikTok video. "My daughter got this for Christmas," Watson wrote in a caption laid over video of her flipping through some of the game's cards. "I need an explanation."

Cards shared by Watson asked players questions like, "Have you ever been arrested?" "Have you ever walked in on someone naked or had someone walk in on you?" "Who in this room would you most like to date?" "Have you ever stolen from a store?" and "Have you ever gone outside without underwear (a bathing suit doesn't count)?" Other cards in the game that caught Watson's attention mention twerking and kissing.

On Tuesday, Siwa said she brought the playing cards to Nickelodeon's attention as soon as she was made aware of their content. "Since then, they have been working to get this game stopped being made and also pulled from all shelves wherever it’s being sold," Siwa said.

In a joint statement issued alongside the manufacturer of JoJo's Juice, Nickelodeon confirmed they had put an immediate halt to sales of the game. "We respect and value the relationship JoJo Siwa has with her fans and take the concerns raised regarding the game JoJo’s Juice very seriously," Fox News reported Nickelodeon and Spin Master said in a statement. "This game is no longer being manufactured and we have requested that retailers pull any remaining product from their shelves."

The Dance Moms alum ended her video statement by thanking her fans for bringing the game's contents to her attention. "I hope you all know that I would never, ever, ever approve or agreed to be associated with this game if I would have seen these cards before they started selling it," she said.