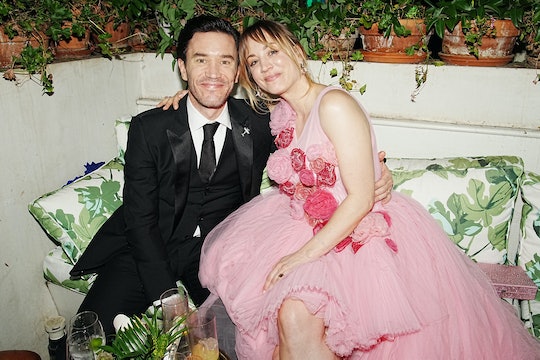 A baby girl is on the way for the happy couple!

Congrats are in order for Kaley Cuoco! The Big Bang Theory actress announced on Instagram that she is pregnant and expecting her first child with her boyfriend, Ozark star Tom Pelphrey. Cuoco also revealed that she is pregnant with a baby girl who is due to arrive next year.

“Baby girl Pelphrey coming 2023💕 beyond blessed and over the moon… I 💓you @tommypelphrey !!!” she captioned her pregnancy announcement on Instagram on Tuesday.

Cuoco, 36, shared a series of happy photos from her pregnancy journey thus far. In one photo, she and Pelphrey, 40, are smiling ear to ear in front of a cake with pink frosting. In other snaps, Pelphrey is holding a tiny onesie that says “I love my daddy” and the horse-loving mom-to-be proudly displays a grey onesie that says “This Baby Needs A Pony.” Cuoco also shared a photo of her growing baby bump and a couple snaps of the pair with Cuoco’s positive pregnancy tests.

Cuoco and Pelphrey have been an item since earlier this year. In April, the Flight Attendant star called Pelphrey “the love of my life.” Just a month later in May, Pelphrey posted a couple lovey-dovey Polaroid photos of him and Cuoco, making their relationship “Instagram Official.”

Pelphrey also made an announcement on his Instagram. “And then it was even MORE BETTER. 🎀🎀🎀. Love you more than ever @kaleycuoco ♥️🙏♥️,” the actor, who most recently starred as Ben Davis in Netflix’s hit series Ozark, captioned a series of sweet photos.

Cuoco, who filed for divorce from her ex-husband professional equestrian Karl Cook in 2021 after three years of marriage, shared in an interview with USA Today that it was “love at first sight” when she met Pelphrey at the premiere of Ozark. “I heard his voice, and I turned around, and it was like my life was over, or just starting. It hit me. It was love at first sight. We were immediately connected. I do feel like I've known him my whole life, but I wasn't ready for him. We're ready to build a life together,” she said in the May 2022 interview.

She did tell USA Today a month later that while she’s still “really not interested in getting married again,” she “did happen to meet the love of my life recently,” aka Pelphrey. “I'm so happy and I feel like I'm at a different place than I was even a month ago,” she told the outlet in the same May interview. “I talk about this a lot with Tom, who's totally changed me. I don't even look at him and say, ‘Where have you been all my life? Why didn't I meet you sooner?’ I don't wish that, and he doesn't either because I had to go through a lot of (stuff) and really look at myself in the mirror and the things that I have (messed up) over my past 10 years that I haven't dealt with ... I'm just at another phase in my life where I want to have a deep partnership. And it hits you like a wave and you're like, ‘Whoa, I've never had that.’”