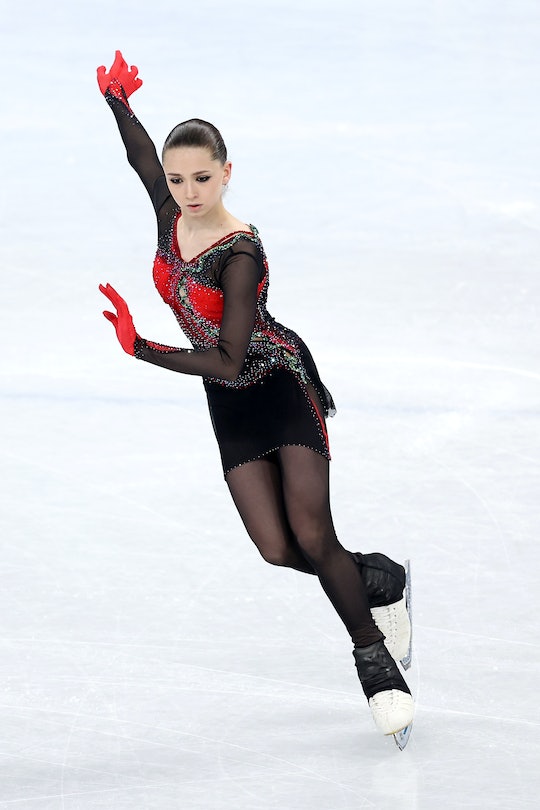 Here's What You Need To Know About Skating Phenomenon Kamila Valieva

The Russian skater made history on the ice at Beijing, but reports have surfaced that she tested positive for a. banned substance.

You may have heard that Russian figure skater Kamila Valieva made history in Beijing and helped the Russian Olympic Committee Figure Skating team take gold. Now that medal is being called into question as reports have surfaced that Valieva tested positive for a banned substance just weeks before the Olympics began.

Who is the controversial young skater Kamila Valieva? Here’s what you need to know about the Olympic wonder.

Kamila Valeryevna Valieva was born April 26, 2006 in Kazan, the capital city of Tartarstan in Russia. She began skating in her hometown in 2009 (we’ll give you a moment to marvel over that math). As a toddler, she was signed up for gymnastics and ballet as well, but told International Figure Skating Magazine in 2020 that she found gymnastics painful and ballet boring. “In ballet, you are doing some exercise, the slow music. I somehow fell asleep!”

Valieva has mentioned her mother in interviews and on her social media presence, but not by name. International Figure Skating Magazine mentions that Valieva’s mother worked as an accountant and moved with her daughter to Moscow when Valieva was just 6. In 2018, Valieva began skating under Eteri Georgievna Tutberidze, who remains her coach to this day.

Her Pomeranian Lyova has become family

Before competing at the Junior Grand Prix Final in France in 2019, her debut year, her mother told her “If you win, we will get you a dog,” she reports in an interview posted to Olympics.com. When she took gold (a feat she repeated the next year), she says her fan club asked what gift they could give her and her mother told them about her promise of a dog. “It has become like a member of our family,” she said. Incidentally, “Lyova” basically translates to “Leo.”

While quads have become standard in men’s routines, Valieva is the first woman ever to land one at the Olympics

For the non-sporty among us, a quad is a jump in which a skater makes four rotations in the air before landing. Before now, no woman has landed this in Olympic competition... and Valieva did it twice in one routine, as well as a difficult a difficult triple axle. Though she attempted a third quad, she took a spill. Still, her accomplishment is incredible. “What she is doing is otherworldly,” said Olympic correspondent Tara Lapinski. “It’s almost like a special effect: is it even real?”

“She is spectacular,” agreed Johnny Weir. “Knowing Kamila, she’s not going to be happy with that performance simply because she missed that one element, even though the rest of the world should only be so lucky to be able to skate like that.”

After Russia won the team skating even this week, news surfaced that Valieva tested positive for a banned substance.

Apparently weeks before the Beijing Olympics began, Valieva tested positive for a heart medication that is on the list of substances banned because they are believed to be performance enhancing. The medal ceremony was postponed and officials are reviewing the case. Questions also remain about whether Valieva will be able to compete in next week’s individual medal competition.

Performing the same program to Ravel’s “Bolero” at the Rostelecom Cup in November 2021, where she won gold.

Furthermore, she holds nine world records in the sport, posting scores at the Rostelecom Cup, Finlandia Cup, Skate Canada, Russian Championships, and European Championships (among others) that have yet to be topped.

More Like This
Elmo Talks About Getting His Covid Vaccine In A Cute New Video
How Amber Heard Plans To Explain The Trial To Her Daughter
Keep Talking To Your Kids About Abortion — It's More Important Than Ever
Meghan Markle Calls On Men "To Be Vocal" In The Aftermath Of Roe v. Wade Ending

This article was originally published on Feb. 7, 2022