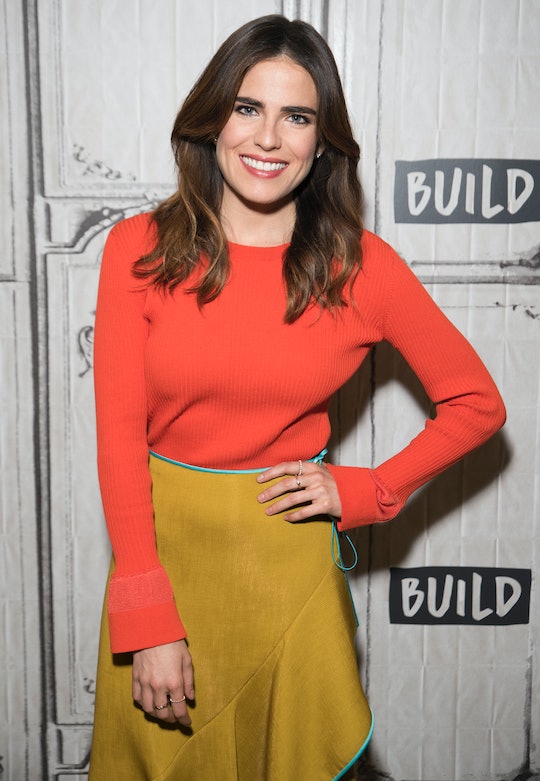 The How To Get Away With Murder actress has a new role, a new baby, and new raisin boobs.

In reviewing the past year, actress Karla Souza is equal parts realistic and grateful. Grateful for the way humanity came together. Grateful for the vaccine she recently received. Grateful the pandemic actually allowed her to spend six uninterrupted months with her toddler, Gianna, and new baby, Luka. And very grateful that, unlike with her first pregnancy, she wasn’t the only one stuck at home not having fun. “I know this is awful, but at least I [didn’t] have to look at everyone doing stuff on social media,” she muses. “It felt like ‘Wow, it’s like everyone's pregnant with me!’” (A theme with Souza: she keeps it real and very funny.)

She’s also so happy to be doing comedy on her new show Home Economics on ABC, which follows the lives of three adult siblings and their families, one in the 1 percent, another middle class, and the third barely scraping by. It’s a heartwarming but awkward exploration of contemporary issues that are often taboo within a family — money, class, race, and privilege — and the bonds that connect us in spite of it all.

It's not that she doesn’t enjoy doing drama; her turn as Laurel Castillo on How To Get Away With Murder launched her English-language career. But 2020 and 2021 have been dramatic enough. Besides, it was comedy — roles in sitcoms like Los héroes del norte and La Clinica — that made her a superstar in her native Mexico.

Romper spoke to Souza by phone (which we agreed is way better than Zoom: who wants to stare at your own face the whole time?!) about her new show, her new(ish) baby, and her post-pandemic plan to lick strangers on the face at raves. (Probably in Florida, she hasn’t quite decided yet).

Romper: Home Economics is so fun. You play Marina, who’s a new mom to twins. So this is the second show that you've worked your own motherhood into somehow — How to Get Away with Murder incorporated your first pregnancy into the plot.

Karla Souza: Yeah. Oh, that's so true! I got the offer for Home Economics when I was five or six months pregnant, and they were going to write Marina to be pregnant. Then COVID hit, filming was delayed, I had the baby, so then they didn't.

Then we had to shoot during COVID and be tested every other day. I'm just grateful that our industry figured out a way to film safely. And I'm so lucky that we got to just go and laugh all day on set versus doing a drama. I was very happy to have that lighthearted, fun, dry, and sarcastic character that is a mother and that's exhausted and has her hair that's falling out and clogged milk ducts and has to pump and dump and all these things that are so specific to me while I have a 9-month-old. It was very fun to be in real time sharing this part of my life.

It’s interesting that you bring up the idea of doing drama versus doing comedy, because I’ve always wondered if there's a different on-set vibe.

KS: Yeah. We had so much fun on set on Murder too, but it's different when you can bring that energy and that goofiness and that release into the scene and improvise and say silly stuff and for that to actually work and make it on the show. Whereas, on Murder, it would end up on the blooper reel. It doesn't translate into the actual performance.

I remember I was five months pregnant when I was trying to shoot a stillbirth scene in the elevator [on Murder]. So that was a very heavy thing to go do. And, at the end of the day, you're just exhausted, your eyes are so red from all the crying. We have a lot of relevant topics on Home Economics as well, but it's not as taxing on my soul or my eyes.

The subject matter Home Economics is dealing with, with some very minor tweaks, could be high drama. There's very little that can get families more tense than the idea of money and inequity.

KS: Oh gosh. Yes. That's what I think is so great, is doing all of these topics through the lens of humor. We have lines like, “You married a Latino. You get points for that." Or like the parents-in-law calling my character "my ethnic daughter-in-law." And like, I literally have in-laws, one specific family member, that every time they see me, they're like, "Oh, tortillas and tequila and tacos." It's a lot of those dramatic, uncomfortable moments through the lens of comedy that I feel make it palatable. I think that's the only way that people can take any of that right now.

Obviously this has been a busy year for you on top of the show. Your son Luka is turning 1 in June! So you have a toddler, Gianna, and you were pregnant, gave birth, and went through your baby’s first year during a pandemic. How did it compare to your first pregnancy experience?

KS: When I was pregnant with Gianna, I was on Murder and I felt job secure. I was pregnant with Luka without a job. So the difference was so huge and it got me very, very angry at how little pregnancy is actually protected in the workplace, even though all those laws that are supposedly there. It just shows that there's very little support in a lot of industries, still, for women and pregnancy and motherhood. That's why I love the team on this show so much. Because when they met me and I was very pregnant they were just game to make it work. I was very happy after having a few jobs that were saying that it was fine, but actually at the end of the day it wasn't.

When I started working on Home Economics, the only bad thing was, because of COVID, I couldn't take my baby to work in my trailer. So, give and take, I had blessings — I got to stay with him until he was 6 months old — and some other things that didn't work out as well. I was pumping on set every three hours.

Shortly after you gave birth to Luka, you posted a picture of you nursing both your children at the same time. In the caption, you said that that tandem nursing was never something you planned to do. That's kind of the subtitle of motherhood in general. Like "Oh, I did not see this coming. But here we are." Are there other things you didn’t plan that took you by surprise?

But my boobs are gone. They're like… what do you call a grape that's dry? Raisin! They're like raisins now! And I was like ‘What has happened? No one told me this was going to happen. What happened to my boobs?’

KS: I never in my wildest dreams thought I would say to you that now I wake up at 6:00 a.m. I would laugh in your face. Also, being excited about the silly things, like watching [Finding] Dory or any sort of kid thing with my daughter. I would never have thought that's all I was going to watch. My friends talk about all these films that they're looking at and they're seeing, and I'm like, "Well, must be nice. I watched Moana for the 15th time. Do you guys remember ‘Shiny?’"

And my body! I'm still tandem nursing – I can't say no to my daughter; she's almost 3 and I'm still nursing her. It's ridiculous. But my boobs are gone. They're like… what do you call a grape that's dry? Raisin! They're like raisins now! And I was like "What has happened? No one told me this was going to happen. What happened to my boobs?"

Are there parenting plans you made while you were pregnant where you’ve really stuck to your guns?

KS: Even when I'm already exhausted and I want to go to sleep, I'm like, "I will stay up until 3:00 a.m.with these friends or this family member, so that I can stay in my head as the cool person that can still do that." Inside I'm like, "I wish I was in bed. I wish I was in bed." But I'm forcing myself to stay up at some New Year's party or whatever. I'm like "No, I still have it. I still have game. I still can do it." But the reality is I'm already an old lady.

So now that we're coming up on a light at the end of the tunnel, with COVID, is there something that you're particularly looking forward to, when things get more back to normal?

KS: I think I will be going to a rave to lick people's faces: that is what I am going to do when all this is over. I'll go to some freaking rave in Florida, or I don't know where, and lick people. Just be like, "Hi, what's your name? Let me lick your cheek." I'm just going to be all over people —but COVID really has to be past by then. It really has to be gone from me to be able to do that. I know we are still going to have to keep at it, and a lot of countries still need the vaccine. There's still a lot of work to do.

But when it's safe to lick cheeks again, you'll be the first one in line.

This interview has been lightly edited.

New episodes of Home Economics air every Wednesday at 8:30 p.m. on ABC.

More Like This
Jenny Slate Played Our Parenting Edition Of Never Have I Ever & Here’s What We Learned
Catherine Reitman Calls It Like She Sees It: “Being A Working Mother Is Impossible”
It's A Beautiful Day In Jenny Slate’s Neighborhood
Megan Fox Explains Why She Asked Machine Gun Kelly If He Was Breastfed As A Baby