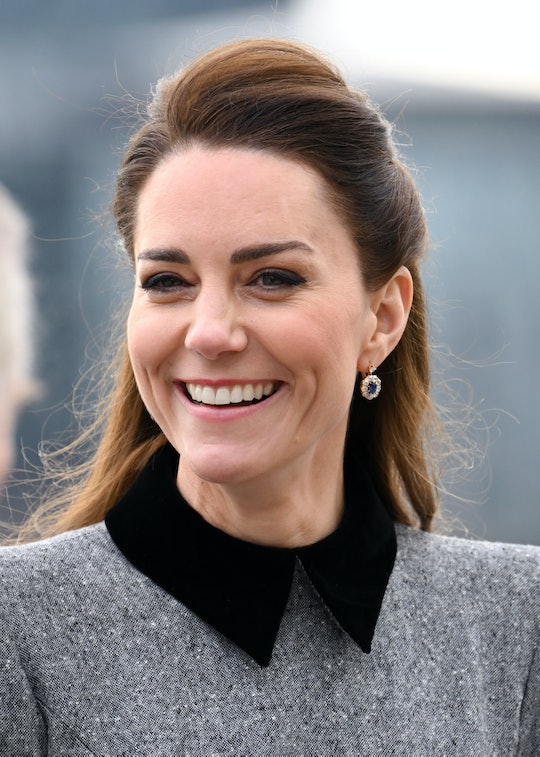 (Which is clever on a few levels, actually!)

On Feb. 4, Kate Middleton, the Duchess of Cambridge, announced her first solo working trip since 2019 on her official Instagram account, and we assume she had a little help from her children... or at least their toys.

In the video, posted to @dukeandduchessofcambridge, Middleton’s hand (identified by her distinct sapphire engagement ring that once belonged to Princess Diana) places an assortment of Lego bricks onto a green background, upon zooming out, the image is that of the Danish flag with “Denmark” written (also in Lego) above.

“Looking forward to learning from experts, parents and practitioners about Denmark’s approach to early childhood later this month,” she wrote. “Denmark is a beacon of best practice in its approach to the early years which values the roles of parents and results in both communities of support and government policies that underpin the best start in life.” She signed off the the Danish expression “På snarligt gensyn,” which translates to “See you soon.”

According to reporting from Hello, Buckingham Palace confirmed that the Duchess will be heading to Copenhagen between Feb. 22 and 23 on behalf of the Royal Foundation Center for Early Childhood, which was established in 2021 “to drive awareness and action on the extraordinary impact of the early years to change lives, improve mental well-being and transform society for future generations.”

To that end, there’s surely much to learn on this visit: Denmark is seen internationally as a leader in early childhood development initiatives, and often tops lists of best countries in which to raise children. According to researchers Ditte Alexandra Winther-Lindqvist and Lone Svinth, 98 percent of all Danish children between 1 and 6 attend an early education and care center (known as an ECEC), where children spend most of their time in outdoor, independent play. Most of these ECECs are public and administered by local municipalities, with parents contributing only about a fifth of the overall cost.

Middleton’s method of announcement was more than just a whimsical use of her kids’ toys – it’s actually clever on a few levels. Firstly, Lego bricks were invented in Denmark in 1949, and have been a point of pride for the nation ever since. Furthermore, in addition to their longevity as a beloved and popular toy for children of all ages, Lego has been touted by experts as a toy that fosters creativity, fine motor skills, spatial skills, and more.

While in Copenhagen, the Duchess will meet with children and families, researchers, and educators. And, because she is royalty, she will be received by Queen Margrethe II, who is celebrating her Golden Jubilee this year, marking fifty years on the throne. (We’ll assume Middleton will have the good taste not to get haughty about the fact that her grandmother-in-law, Queen Elizabeth II, is celebrating seventy years on her throne with a Platinum Jubilee.) She will also meet with the Crown Princess Mary.

More Like This
The Heartfelt Details You Didn't Notice In Kate Middleton & Prince William's Portrait
Viral TikTok Video Confirms Princess Charlotte Is Princess Diana's True Heir
Meghan Markle Calls On Men "To Be Vocal" In The Aftermath Of Roe v. Wade Ending
Princess Charlotte Got So Excited To Shake A Royal Fan's Hand